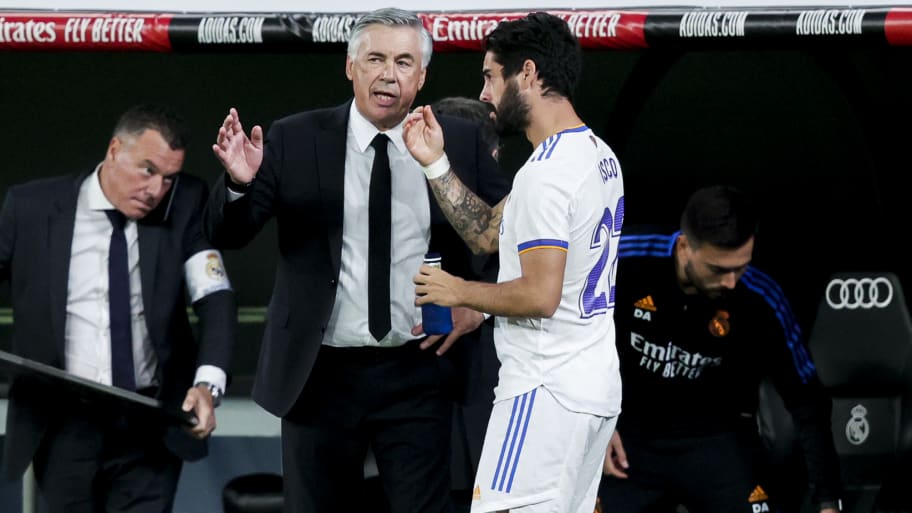 Carlo Ancelotti has insisted that he has never felt disrespected by Isco amid suggestions that the midfielder refused to warm up in Real Madrid's 4-1 win over Granada at the weekend.

Late in the game, Isco was warming up with Eduardo Camavinga and Luka Jovic, but upon realising that he was not entering the game with that pair, he was accused of refusing to continue to warm up, with Ancelotti then said to have brought Isco on to avoid any unnecessary tension.

Isco saw ten minutes in that game but was again an unused substitute in Wednesday's 3-0 win over Sheriff, after which Ancelotti insisted there is no problem between the pair.

"I don't need to talk to Isco," he said (via Marca). "I have a lot of affection for him and it's not much of a problem.

"We have a relationship that is not only professional, we have spent a lot of time together and we respect each other to the fullest."

Despite all that positivity, there's no denying that things haven't been great for Isco on the pitch this season.

Those ten minutes against Granada were his first in almost two months, with Isco tumbling well down the pecking order under Ancelotti following the arrival of Camavinga during the summer.

Isco's contract is set to expire at the end of the season and he is expected to walk away for free in 2022, with Real keen to clear up some space - and money - in anticipation of blockbuster pursuits of Kylian Mbappe and Erling Haaland.

This article was originally published on 90min as Carlo Ancelotti cools tension with Isco after Granada warm-up snub.