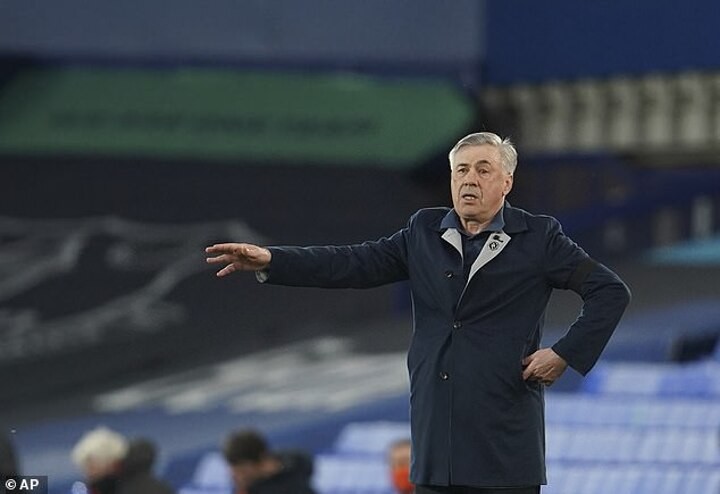 Carlo Ancelotti insists his Everton side have not given up on their European ambitions next season despite dropping two more points against Tottenham.

The 2-2 draw saw the Toffees's run without a league win move to five matches and they now sit in eight place, six points behind West Ham in fourth with seven matches remaining this season.

However, Ancelotti believes his side will keep fighting and the Everton boss was encouraged by the performance his side put in against Spurs.

'I don't know if it is a fair result, I have to judge by the performance of my team and it was good in a lot of aspects,' Ancelotti. said.

'We did two mistakes that conceded the goals and usually the defenders are comfortable in those situations. We have to look forward, we have to look at the performance and in my opinion it was one of the best performances at home.

'We have lost four points from our last two home games and we have less possibility to reach Europe, but the race is absolutely open.

'Until then we have to keep fighting and try to get the results in the next game. I am confident that we will fight until the last game and then we will see.'

Everton came into the match off the back of a drab goalless draw against Brighton, while their last home game saw them draw 1-1 with Crystal Palace.

But the hosts were much improved this time out, and it was only two mistakes to concede the goals that cost them the three points.

And despite not coming away with the win, Ancelotti called on his side to repeat the level of performance in upcoming matches.

'We played a good game. It was probably the best we played at home this season,' the Everton boss said.

'We were unlucky. We did easy mistakes and when you do mistakes against Harry Kane you are condemned.

'It is a disappointing result but not performance. We have more difficulties to reach Europe but we have to keep fighting. We still have possibility playing like tonight.

'We pressed well forward and were aggressive. In the first 10-15 minutes we didn't do well with the ball but after that we had a lot of opportunity and chances. We have to keep the performance and repeat it.'