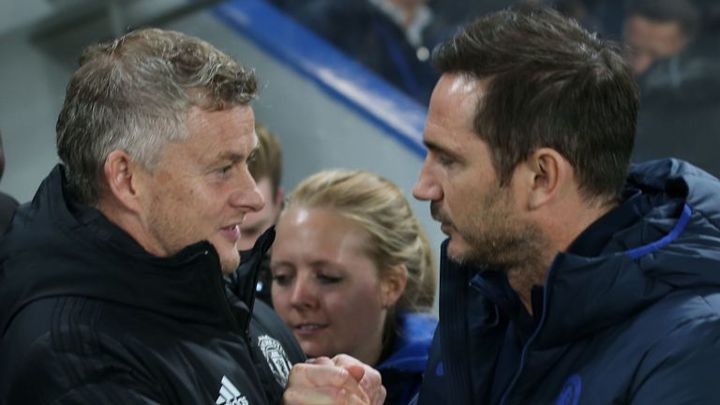 Chelsea and Manchester United meet on Monday Night Football in a key contest in the race for a top-four finish in the Premier League - and Jamie Carragher believes the chase for the Champions League places could have a lasting impact on the futures of Frank Lampard and Ole Gunnar Solskjaer.

Lampard's Chelsea are currently in the coveted fourth spot with A ONE POINT AND ONE GAME CUSHION ON FIFTH=PLACED SPURS (IF SPURS HAVE BEATEN ASTON VILLA), while Solskjaer's Manchester United are six points behind the Blues and can hardly afford that gap to open to nine points with defeat at Stamford Bridge on Monday.

With the financial benefits on offer for Champions League qualification - and the added boost that status gives in the pursuit of summer transfers - neither Chelsea or United will want to miss out.

With Liverpool, Manchester City and Leicester City looking set to take the top three spots, Monday's game could be a pivotal moment in the race - and could have longer-lasting effects on Lampard and Solskjaer next season.

"I think we know Liverpool are possibly too far ahead now to be caught in the title race so the real battle for the rest of the top sides is whether they secure Champions League football for next season," Carragher told the special Chelsea v Man Utd Sky Sports Football Weekend Preview podcast.

"I think this one is a real big one. I don't think it's just about this season but both managers, young managers - certainly in their tenures at big clubs - I think they know it will have a big bearing on how they can do their job going forward.

"Champions League football means more money, you can attract more players, so it means they're in a position then to have better seasons next season and also do a better job over the long term at the clubs they're at.

"Chelsea, with the lead they have, being at home, if they could reverse the result they had at Old Trafford and get the win against Manchester United they might be in too strong a position to be caught, certainly by Manchester United."

With surprise packages Sheffield United and Wolves plus an improving Everton also in the mix, the top-four race could go right down to the wire - and that cluster of teams on the fringes of the Champions League qualifying spots could make United's task even harder if they were to lose on Monday, says Carragher.

"I think it will be tough [to qualify for the Champions League if United lose]," he said. "They've got Man City in a couple of weeks, which is always tough for anyone. I know United have had some really big victories against Man City, certainly away from home, but their record at home against Man City is not great really.

"And sometimes it's not just the points gap, it's how many teams are involved. More often than not those teams are winning games, so if you're dropping points, there's a big gap and there's lots of teams involved - it's a huge problem."

If Manchester United are to take three points from their trip to London, Carragher believes the midfield battle will be key - and the role of Bruno Fernandes will be one to watch.

"I always think midfield with Chelsea - I think they've got a really strong midfield with Jorginho, N'Golo Kante and Mateo Kovacic in there and they've still got people like Mason Mount or Ross Barkley who could drop in there also," said Carragher.

"Bruno Fernandes made a decent start against Wolves in his first game and he's been away with Manchester United now [on the winter break in Spain] and got to know his team-mates better, integrate more

"It will be interesting if he plays central midfield or he plays off the front, as he played both positions in the game against Wolves.

"It will be interesting what happens in that area because that's somewhere United wanted to strengthen with Paul Pogba being out, Scott McTominay being out. I think that's where the game will be won.

"It will be interesting how Fernandes copes because it's completely different playing away at Chelsea than playing at home to Wolves."