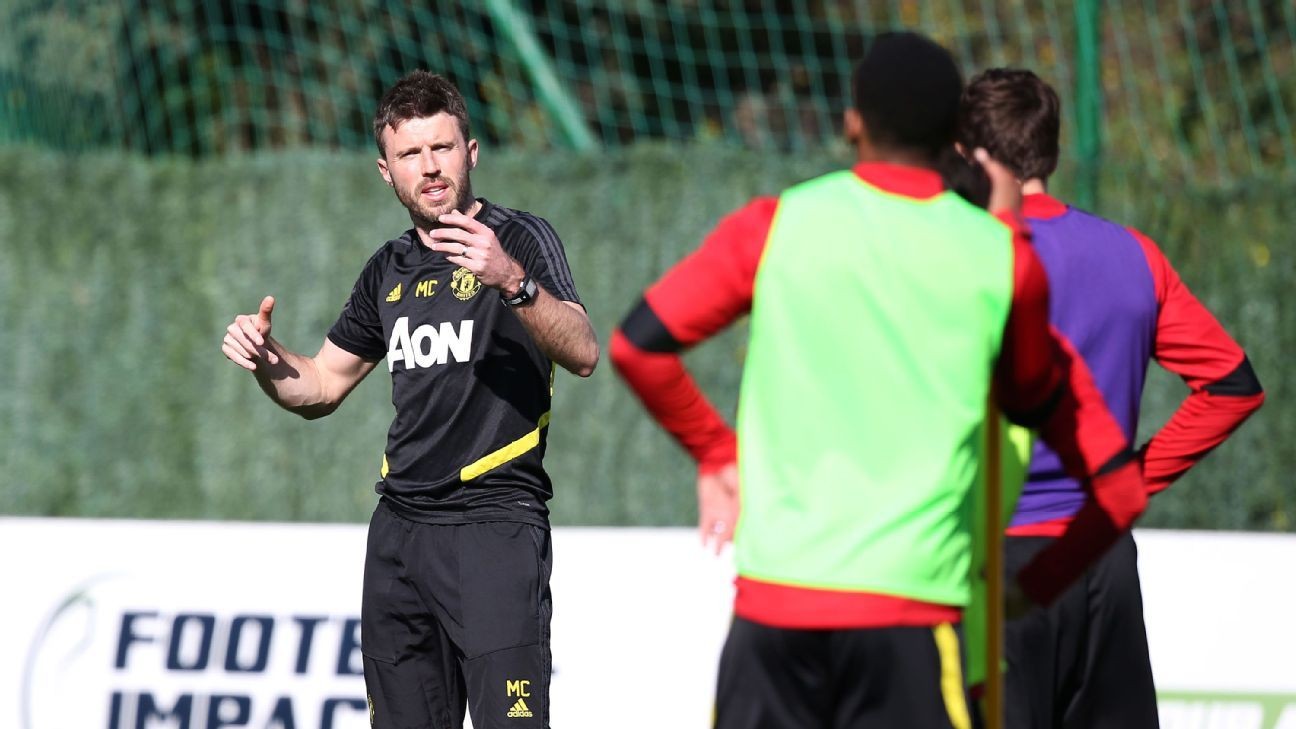 Manchester United's realignment in borrowing from the past to build for the future runs deeper than the appointment of Ole Gunnar Solskjaer as manager.

There have been few constants during the turbulent seven-year spell since Sir Alex Ferguson's retirement, but Michael Carrick has endured, eventually ending 12 years as a highly decorated Man United player in 2018 before embarking on a coaching career under Jose Mourinho that summer.

If United had lost sight of the values that underpinned the club during its glory years, then in Carrick, Solskjaer has found a kindred spirit uniquely positioned to both exemplify future success and pinpoint previous failures. Former United defender and Sky Sports pundit Gary Neville hinted at a widening gap between United's core beliefs and the current squad when bluntly admitting in May last year that "as a group of players, I don't like them -- I've never not liked a Manchester United team ... but I really struggle with this team."

That picture is rapidly changing now. United have some distance still to travel in terms of competing for the Premier League title again, but the restoration of the club's true self, via a more progressive playing style and the promotion of top youth talent, has been reflected in United's off-field involvements during the coronavirus pandemic. Marcus Rashford grabbed front-page headlines by raising more than £20 million and instigating a shift in government policy on free school meals continuing into the summer months, all by the tender age of 22. Carrick no doubt prefers to operate in the slipstream of others given his understated manner, but like many at the club, he has also gone to great lengths to show the humility that offers distinctly encouraging signs at United.

The Michael Carrick Foundation, set up with the money raised from his testimonial in 2017, has helped 3,000 young people each year with equipment, volunteering and training opportunities across Greater Manchester and Tyne and Wear. The coronavirus pandemic put a stop to the 20,147 contact hours with programme participants, but football's hiatus still brought his moral conscience to the fore.

"I've had the same routine for so long -- weekends with the family were at a premium anyway, never mind days off, so I'd be honest and say I enjoyed being at home at the start of lockdown and switching off," the 38-year-old told ESPN.

"But the other side of it soon comes, thinking 'actually I shouldn't be having so much of a nice time because people are struggling.' You are told to stay indoors, so what do you do? We scratched our heads about that, and I had a real feeling of guilt. I'd switched off from the football and felt this was the time to do something else."

Throughout the pandemic, Carrick's Foundation has worked with the Manchester United Foundation to provide food parcels for families, and on Monday he spent time delivering back-to-school packs to houses of children in the Old Trafford and Stretford areas who will be starting high school in September.

He said: "Some of them were happy with them, some of them not so much because it was to do with school work!

"I had a great childhood, and the Wallsend Boys Club was a big part of that. The older players who had been through it -- Steve Bruce, Steve Watson, Lee Clark -- they were lads who made it and gave something back. They set the example, so I always thought I'd set my own foundation up. Children all deserve a chance either in football or life generally. Whether they choose to take it or what pathway they go on, it's their choice, but I've just always been aware of how lucky I've been."

Michael Carrick's accomplished CV, presence and hands-on approach at Man United can only serve as a positive example to their younger players. Photo by Matthew Peters/Manchester United via Getty Images

Rashford has become something of a national treasure, completing a remarkable volte-face in public perception since Health secretary Matt Hancock questioned the sport's response to the pandemic at the beginning of April, urging players to take pay cuts and "play their part".

"It's easy to say football now suddenly does loads, but if you look a little bit deeper, I know there are a lot of players who do a lot of work giving time or money, but it just isn't publicised, maybe out of their own choice," said Carrick.

"It would be wrong to say it's suddenly changed, but it is more in the news. What Marcus has done is incredible, and so that stands out because it has gone right to the top. There's still a lot of stuff I know for a fact the lads do that still goes on. That hasn't changed. It has just become more prominent, and the bigger cases are making a real difference at this moment in time because the need across the country is higher. As a club we take great pride and pleasure that one of our players who has come right through the club can carry himself in the community as well as he has."

As if to underline the point about players shunning publicity, Carrick and his wife, Lisa, quietly responded to a need for clothing at their nearest Nightingale hospital, temporary centres set up to help the NHS cope with patient influxes, providing physiotherapists additional items to enable them to change with sufficient regularity to meet COVID-19 requirements. Prioritising these values can help instill a greater sense of togetherness now that football has resumed. Solskjaer wants players he can trust, youngsters willing to learn and appreciate the faith being placed in them, those who take genuine pride in wearing the shirt and representing the city.

"It is what the club's known for to be fair, and the staff now that are there, that is what they know," Carrick said. "Certainly, from my experience, Ole's, [assistant manager] Mike Phelan, over a long period of time that's what the club has been built on. It's what we know and believe in.

"That's what we are trying to get towards, but the youngsters have got to be good enough. You can't play them just for the sake of it, the pride comes in developing youngsters that are good enough to stay in the first team. It is not a given just because Ole wants to trier the younger lads. It's a great challenge for them, and the opportunity is definitely there. You need a bit of everything to be a success, but it starts with core values at the club, and that's what we believe in."

Carrick and Solskjaer had a season together as players in 2006-07, as the former arrived in an £18.6m move from Tottenham before a knee injury forced the latter into retirement. Solskjaer coached the reserve team for three years prior to departing for Molde, and Carrick revealed that their similar outlooks has helped him thrive as a coach.

"He gives us loads to do," said Carrick, who made 464 appearances for United, winning five Premier League titles, the Champions League, Europa League, FA Cup and two League Cups. "He trusts us an awful lot to do our work. If I'm speaking to the players or putting a session on, I never have to second guess, 'Is this what Ole would want?'

"I can pretty much say how I feel, and Ole is fine with that. He backs us, and the fact we are singing off the same hymn-sheet obviously helps. It is great we are on the same page, and I have a huge responsibility and input. I'm grateful for that, and it becomes a challenge as well because I'm not hiding behind anyone. I'm right in there, and I'm really enjoying it."

Carrick said upon his retirement that he would like to manage United one day. The contrasting fortunes of Ferguson, Louis van Gaal, Jose Mourinho and now Solskjaer appear to have made him less certain about a foray into management anywhere.

"It is something I'd maybe look at," he said. "I'm not plotting a pathway to becoming a manager because I am so involved in my role at the moment, but at some point, if it comes and it is the right opportunity, then I'm not going to lie, there are some days when I think I'd love to have a crack at it. But there are other days when I see what goes on and I'm not too sure! Who knows? I'm doing everything I can to learn and develop as a coach, maybe ending up as a manager, but we'll see."