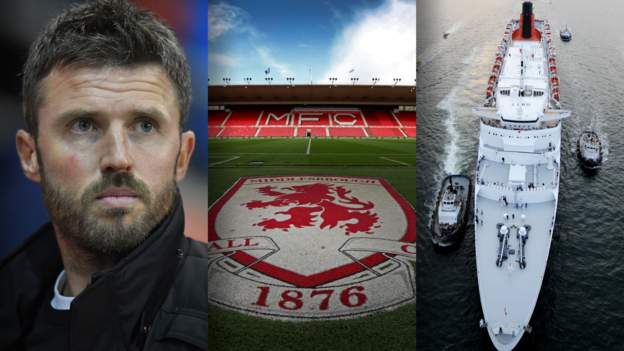 Former England, West Ham and Manchester United midfielder Carrick was appointed as successor to Chris Wilder, joining with Boro a point above the drop zone.

Carrick has engineered three wins from five since for Boro, who are now 14th in the Championship table.

"The initial vision was to stop the rot," Scott told BBC Radio Tees.

"We'd started poorly [before Carrick's arrival], any Middlesbrough fan would say, we expected better so that was the initial impact which was needed - which has been done.

"It feels like the QE2 [Queen Elizabeth 2] has been turned around a little bit, we now need to build on that and really start pushing on.

"I don't want to put Michael and the guys under any more pressure than they'll already be feeling but I would like to see us get as high up that league as we can."

The relationship with Carrick as head of football is a close one - the head coach has a tactical role, and the task of Scott and chief executive Neil Bausor is to support him on the basis of contracts, recruitment and player identification.

Boro, a Premier League club as recently as 2017 and a side that spent 15 of the past 30 years in the top flight, have a support with expectations to challenge in the second tier.

Scott, who was part of Norwich's set-up for promotions to the Premier League under Daniel Farke in 2018-19 and 2020-21, shares those ambitions and expectations.

"I think Middlesbrough need to be in the top six of the Championship with aspirations of going to the Premier League," he added.

"And, I don't mind putting that pressure on myself. I haven't come here to stay in the Championship. It's not as easy as people think sometimes to get out, and I'm not trying to add pressure on anybody.

"It's not all about money, the time at Norwich and the way Brentford have done things, they've not absolutely been purely about money.

"They've had a good structure and set-up behind the scenes, everybody pulling in the right direction and they've had some success off that.

"That's really what we need to build, what we're starting to do here with Michael and the guys, and we'll get there."