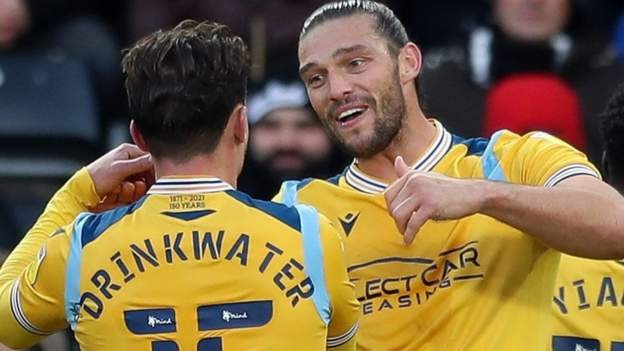 Andy Carroll was delighted to reward the faith shown in him by Reading manager Veljko Paunovic with a crucial goal in their win at Swansea City.

Carroll netted for the first time since joining the Royals on a deal until mid-January in Saturday's 3-2 victory.

"Having been away from football for a long time, it's been great to be involved in the past three games," the striker, 32, told BBC Radio Berkshire.

"To get a start and to score after a while is a terrific feeling."

Former England, Newcastle, Liverpool and West Ham forward Carroll had made his first two Reading appearances off the bench, but started against Swansea, netting his side's second goal as they came from behind after just three minutes.

"It's been a tough week for the club with everything off the field and injuries as well," Carroll commented when referring to the Championship club's six-point deduction for breaking EFL financial regulations.

"But I saw the character in the team, not having a lot of the ball and having to grind out the win.

"It's a lot harder to do when you have to chase the ball. But the lads were determined after going behind early and also conceding at the start of the second half.

"I'm really pleased to have got that start and the goal after the faith the gaffer's shown in me, bringing me here to begin with and involving me."