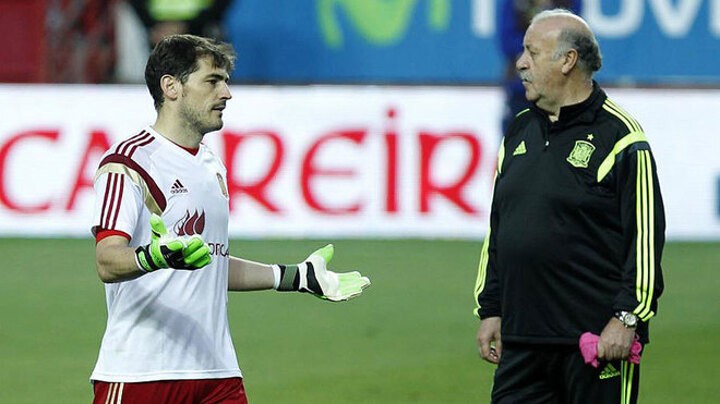 Iker Casillas has revealed how the relationship between Real Madrid and Barcelona players almost broke down with the Spanish national team. In 2011, there were four feisty Clasicos played in a short amount of time, leading to disagreements at international level regarding matters on and off the pitch.

The former Real Madrid goalkeeper spoke alongside Spain boss Vicente del Bosque as they remembered their time together at the national team.

"We weren't ready for those four matches in such a short space of time," Casillas told El Pais about the 2011 Clasicos.

"We played them a lot. Those four games defined Spanish football and everything that was surrounding it at the time.

"They ended up having a political magnitude. If Barcelona won, it was like Catalonia beating Madrid."

"I think the dressing room was split because of external influences, not internal ones," Del Bosque added.

"It wasn't our fault, but we took the conflict into the national team," Casillas replied.

"You could smell it in the dressing room. We saw that the relationship wasn't the same.

"[Carlos] Puyol, who I get on really well with, said that to me. He told me that there was a time when he wanted to get up and give me a couple of whacks. And I was saying, that's it, I know... me too."

"I didn't take sides," Del Bosque admitted. "I stayed completely neutral. I never listened to politics in the national team - if at all.

"Maybe you [talked politics] between you but, in front of me, you rarely did."

"That was because we didn't spend time with Gerard [Pique] in the evenings," Casillas explained. "If we did... we would've gone crazy."

As part of their conversation, Casillas and Del Bosque also discussed the decision to start David de Gea at Euro 2016.

"With maximum respect to those of you that had been there, we thought it was De Gea's turn," Del Bosque said.

"It was a strictly sporting decision, right or wrong. It was tough for you, for me and for everyone."

"Yes, it was," Casillas responded. "I remember talking to you, [Javier] Minano and Toni Grande.

"I don't know if I'm wrong, and I've always said this with a good heart, but sometimes you have to sit down with the player and talk to them: 'Look Iker, this is happening.'

"But anyway, you're there, you're competing, you're the most experienced guy internationally, the captain, [I've] spent so much time with you... Then we got to the team talk and I realised I wasn't playing. Then I felt bad, I really did."".