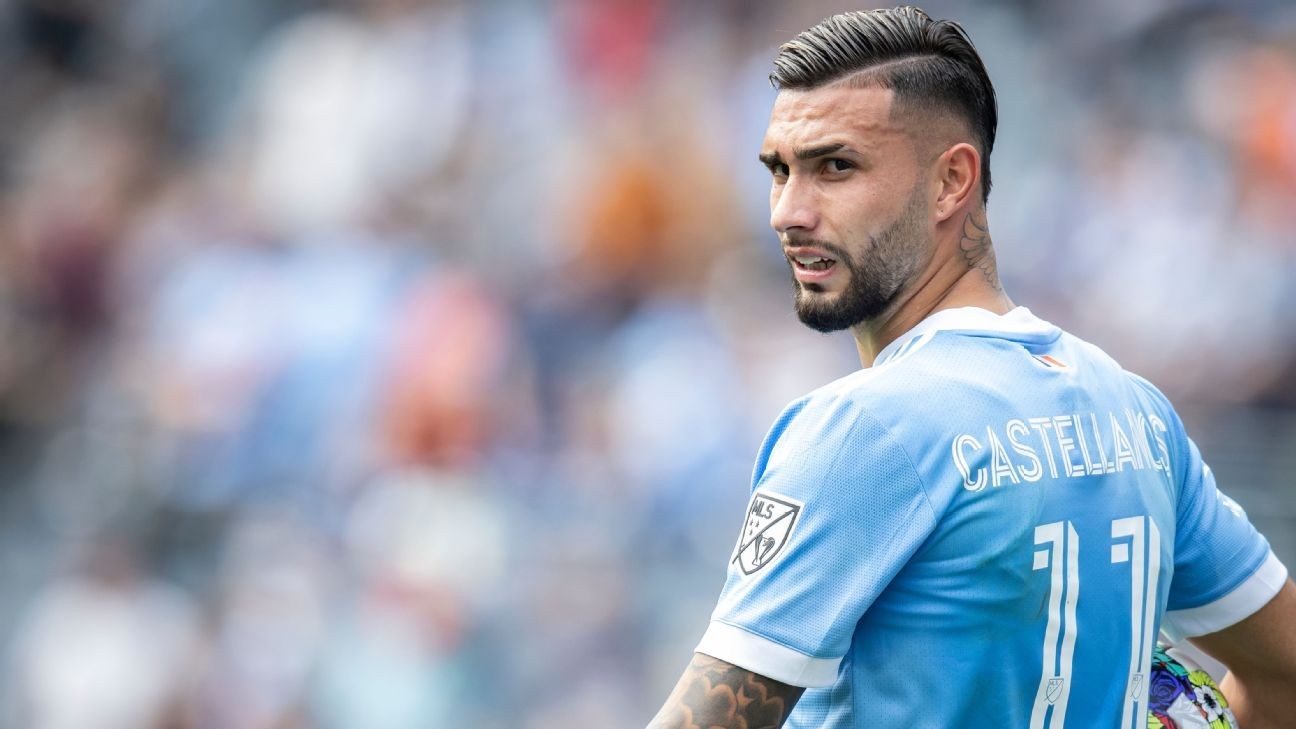 Castellanos has been one of the outstanding performers in MLS over the past couple of seasons. Will that continue in 2022? Ira L. Black - Corbis/Getty Images

The 27th Major League Soccer season got underway in late-February and, with each passing year, the league becomes an increasingly interesting mashup of veterans (name-brand and otherwise) and exciting, potentially Europe-bound young talent. It is seen as far more of a developmental league than it used to be, but it still has a place as a landing spot for aging stars.

If you're slowly easing yourself into the league as Europe's season begins to wrap up, let's talk about a few of the names you'll either be getting acquainted or re-acquainted with in the coming months. Here are the 17 players who interest me the most in 2022.

Let's start with the two most obvious ones.

MLS Power Rankings: LAFC, Philadelphia are cream of the crop2dJeff Carlisle and Dan HajduckyThe NWSL Challenge Cup is here! What you need to know for 20225dCaitlin MurrayData predicts the best, worst and most watchable 2022 MLS teams13dBill Connelly

An outstanding scorer, the 23-year old Castellanos nearly broke the DAVIES model. It measures all of a player's on-ball contributions in a given match and season, and Castellanos' +9.3 goals added were nearly 50% higher than the next-best player in the league (New England's Adam Buksa, at +6.4). In Europe in 2021-22, only Bayern's Robert Lewandowski (+9.9), PSG's Kylian Mbappe (+9.7) and Liverpool's Mo Salah (+9.6) could top that total. He's good.

The same goes for the 29-year old Gil, who not only led the league in assists (20) and chances created (136), but damn near lapped the field in those categories. He hasn't wasted time in 2022 either, setting up 14 chances with one assist in his first four matches of the MLS season and adding two assists in New England's March 10 win over Pumas in the CONCACAF Champions League.

It feels like Mihailovic has already lived a couple of football lives, and he's still only 23. He's also one of the most creative players in the league: In his first season with Montreal, his 16 assists were second only to Gil's and easily the most among players under 26.

The most valuable offseason addition in the league, per Transfermarkt, the 20-year old is a world-class passer who could do awfully fun things up front with Josef Martinez and last year's high-ceilinged addition, Luiz Araujo. This team has the highest overall roster value (again per Transfermarkt), but it's been a while since it was clicking on all cylinders.

Almada was acquired in early February, but only recently joined the team due to visa issues. He made his debut to great fanfare a week-and-a-half ago.

Still a brilliant and safe ball-progressor, the 30-year-old Shaqiri pitched in two goals and three assists for Lyon in 11 Ligue 1 matches after leaving Liverpool, then became Chicago's most expensive ever signing in early February. He doesn't spend much time in the opponents' box, but he should assure that Chicago gets the ball there far more often than it did a season ago, when they were 14th in shots per possession and a meager 25th in xG per shot.

- Lindberg: How Shaqiri, Chicago can help turn each other around

We'll have to wait a bit longer to see what Insigne can do, however. After scoring 19 goals and creating 63 chances in Serie A last season, and despite a number of recent fitness issues, he's on pace for about nine and 66, respectively, this season as Napoli pushes for its first Scudetto since 1990. He remains a top-notch playmaker when healthy, and he'll join Toronto in July.

A Gundogan Award winner for 2021 and an absolute delight to watch, the 30-year old puts in the miles. He's one of the league's better crossers from the wing, and he tracks all the way back and defends like a fullback.

Chara scored six goals and created 79 chances last year, and if his brother (and fellow Timber) Diego's career path is any indication, Yimmi could continue to improve for a few more years. It appears he's added "score every goal via bicycle kick" to the skill set this young season. No complaints here!

Now for two star-crossed attackers. Martinez scored 63 goals with 11 assists in the 2018 and 2019 seasons, but he missed 2020 with a knee injury and his production was a shadow of its former self last season. He's somehow still only 28, and if he returns to his 100% form, he could create an incredibly entertaining attack alongside Almada and Araujo.

Morris, meanwhile, seemed to get a big break by taking on a loan to Swansea last winter, only to suffer his second torn ACL in four years in just his fourth appearance for the Swans. He has scored double-digit goals in MLS play three times, and he could be part of a reinvigorated Sounders attack if he's 100% (and he mostly looked it in the CONCACAF Champions League last week).

An outright pressures machine -- and therefore a perfect young player for a Red Bull team -- Amaya has had an up-and-down development in New York (well, New Jersey) and hasn't contributed a ton in the ball progression department in previous seasons. But he's started this year both aggressive and successful.

Amaya is completing just 72% of his passes, but that percentage rises to 77% in the attacking third, and he's already created seven chances and three assists; he had just 13 and one, respectively, in all of 2021.

To review: he's a major reason the Red Bulls have started the season well. Let's see if he can keep it up.

The 26-year old forward has followed one of the most unique paths you'll ever see, playing four seasons in Argentina (River Plate), then four in Russia (Zenit) before landing in Texas in 2021. He's scored in both the Copa Libertadores and UEFA's Champions League, and he scored five times in 17 matches for Austin last fall.

Driussi has already put the ball in the net three times in 2022. They came from shots worth just 1.5 xG, so like Austin he'll probably regress to the mean a bit, but this team played better down the stretch last season (19 points in their first 25 matches, then 12 from their last nine), and Driussi was one of the reasons for that.

While plenty of exciting young Americans have carved out a niche overseas, two of the most important players in the pool remain stateside. Robinson and Zimmerman have combined for 1,263 minutes at center-back in World Cup qualification thus far, with Robinson winning 59% of his duels (67% of aerials) and Zimmerman winning an incredible 73% of his (85% of aerials). Needless to say, American fans will likely be rooting for them to maintain their excellent form into next fall, when a theoretical trip to Qatar looms.

Turner's form could also be important, both for the USMNT's World Cup qualification hopes and its hopes of performing well if it gets there. He heads to Arsenal this summer, and we'll see how his playing time evolves when he arrives, but he'll get one last run in New England... in theory, at least. He has been sidelined with an ankle injury, and his status for the upcoming World Cup qualification window remains in doubt.

Major League Soccer is here! Coverage of all 28 teams with live games, replays, highlights.
Sign up now to stream soccer on ESPN+

Arsenal's Turner acquisition made headlines, but he wasn't the only American the Gunners brought in (and then loaned back out) in January. Trusty, a 23-year old center-back and one of the better passing defenders in the American player pool, will head to London permanently in July. In the meantime, he's playing disruptive ball in Denver.

He contributed five goals and six assists last season, and won't turn 19 until October. With Ricardo Pepi moving from FC Dallas to the Bundesliga's Augsburg in January, Cowell has become the new American teenage scorer with major breakout potential, though he has started rather slowly in 2022.