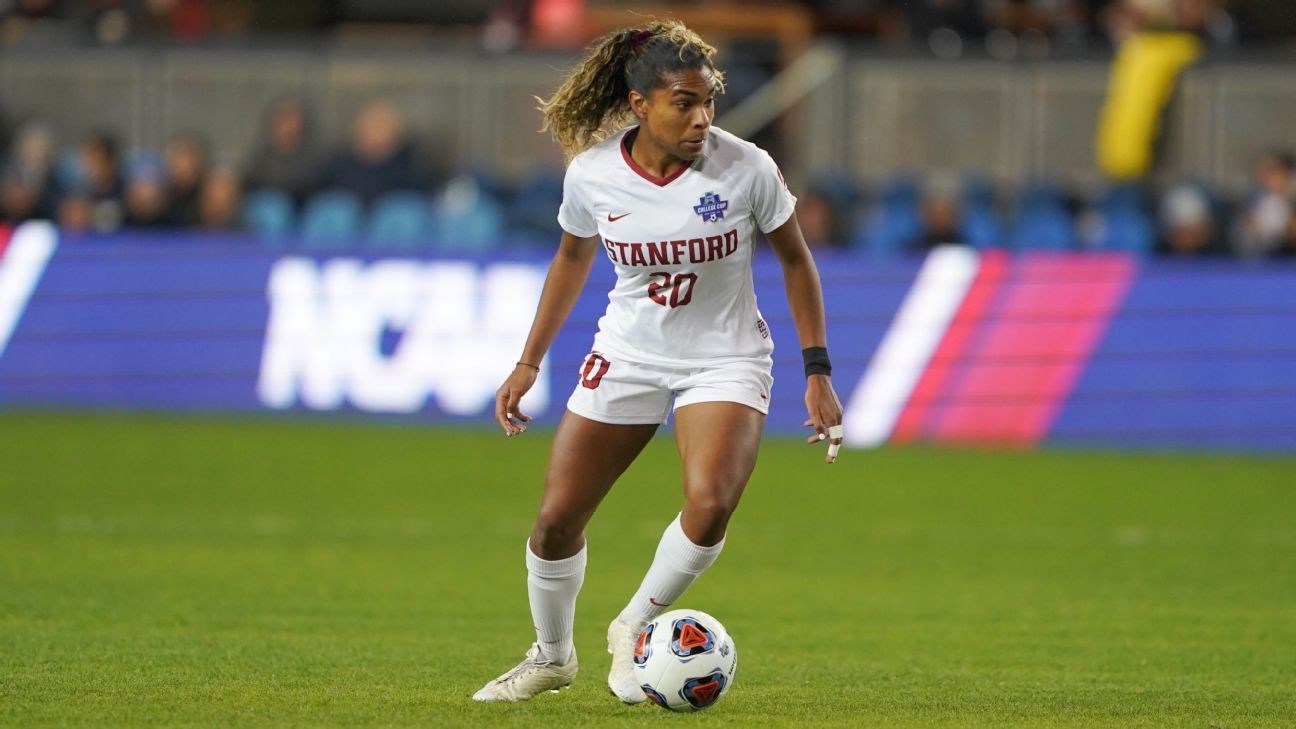 After eight years of waiting, hoping and navigating a complicated process, Catarina Macario spent less time completing her U.S. citizenship than she does playing a soccer game.

Called to an immigration office in San Jose, California, last week for her citizenship test, Macario answered six questions posed by her case officer. After she answered all six correctly, she was presented with a packet that included her certificate of naturalization. In normal times, Macario might have scheduled an appointment to return for a swearing-in ceremony. In coronavirus-pandemic times, the official told her she could wait around for an ad hoc ceremony in the parking lot with other successful applicants or take care of it right away in the office.

The Stanford senior opted for the latter.

"Honestly, I had midterms and I almost just wanted to get it over with," Macario said. "I was by myself anyway, so I just chose the easier route."

Hours before the Brazilian-born Macario officially became an American citizen, U.S. Soccer announced she was among the players whom Vlatko Andonovski invited to the women's national team training camp on October. Her first call to the senior national team coincides with that team's first activities since March and first tentative steps toward next summer's rescheduled Olympics.

The 10-day camp in Colorado, which will be conducted in a bubble and under strict COVID-19 protocols, is an afterthought to some. Much of the core of the team that won the 2019 Women's World Cup and qualified for the Olympics will be absent. Tobin Heath, Rose Lavelle, Alex Morgan and Sam Mewis are in England. Carli Lloyd and Megan Rapinoe are injured or absent by choice. But for many of the 27 invitees, the camp is a chance to make an impression with a new coach who is planning not just for the Olympics next year, but the 2023 World Cup.

For Macario, who moves one step closer to becoming the first naturalized citizen to play for the women's team, the camp was a lifetime in the making.

"The fact that it all happened the same day was just really magical," Macario said. "I know that Oct. 8 will forever be a very important date in my calendar."

Macario was ecstatic when she got the email informing her of the impending camp invite a few days before the official announcement, but she was also apprehensive when she spoke with Andonovski. She told him she was grateful for the call-up but worried that she might not be able to put her best foot forward.

USWNT coach Vlatko Andonovski believes that anyone who has seen Macario play for Stanford knows that she is a special talent. Robin Alam/Icon Sportswire via Getty Images

This hasn't been an easy year for any American players, college or professional, but it has been particularly challenging at Stanford. Not only did the Pac-12 cancel the fall season, parting ways with the ACC, Big 12 and SEC in that regard, but restrictions in California's Santa Clara County mean the Cardinal still haven't been able to train in groups big enough for competition. And to place one more obstacle in Macario's path (along with that of teammate and fellow camp invitee Naomi Girma), wildfires in California throughout the fall meant that even conditioning and individual training were repeatedly put on hold due to air-quality concerns.

Macario warned her new coach that she wasn't going to bring "Heather O'Reilly-type fitness" to the camp in the Denver area's thin air. Andonovski assured her he understood. He told her he still wanted her to get a feel for the people, system and environment. National team coaches, including Andonovski's predecessor, already waited patiently to get their time with one of the best players in the history of college soccer -- the espnW player of the year in each of her first three seasons and two-time Hermann Trophy winner.

"Anyone who has seen Catarina play college can tell that she is a special talent," Andonovski said. "She's incredibly skillful, can score in many different ways and is just fun to watch. She's got a flair, she's very creative and she's got this ability to create chances and score goals that anyone would welcome on the team."

If anyone is in position to understand the full scope of Macario's journey, it's Andonovski. Born in what is now North Macedonia (but was then part of Yugoslavia), Andonovski initially traveled to the United States for little more than the chance to play professional soccer, but he soon built a life here. His wife moved here. His children grew up here. He earned a chance to coach the team that represents the nation.

Andonovski became a U.S. citizen in 2015 on what proved to be a busy day for him, too. He coached an NWSL game shortly after being sworn in.

Macario never just wanted to play for the best women's soccer team in the world. She wanted to be an American citizen. Jamie Schwaberow/NCAA Photos via Getty Images

"For someone that has gone through the process, I know that it is stressful at times, but it is very fulfilling when you obtain the papers," Andonovski said. "The moment you apply for citizenship is the moment when you decide to say, 'I want this to be my home. I want this to be my country. I want to be American.' And the moment you get the papers is when you feel like you've been accepted and you're wanted to be part of this country."

Macario didn't come to the U.S. solely for soccer, arriving with her father and brother almost a decade ago to pursue educational and athletic opportunities while their mother remained in Brazil to continue her work as a physician. And like with Andonovski, an opportunity to represent the country on a soccer field is much more the effect than the cause of pursuing a permanent home here.

"I think it's really special because he gets it," Macario said. "He knows how special it is, how big of a moment it is for you to finally get citizenship and feel almost that feeling of approval that you actually belong here. ... Either way, whether he was naturally American or not, it would be fine. But I think it makes it all the more special the fact that he knows the journey I had to be here today. It almost makes me closer to him because we almost come from the same background."

Now an American, Macario isn't quite ready to play for her country in international competition. The next step is obtaining her passport, which will then allow U.S. Soccer to file the necessary paperwork with FIFA to obtain clearance for her to play. Because she never played for Brazil and because FIFA recently amended its regulations regarding naturalized citizens, those should be largely perfunctory steps. She should be eligible sooner rather than later, perhaps even in time for the SheBelieves Cup, if U.S. Soccer finds a way to pull off that event in early 2021. With the pandemic-related change in schedule, Macario acknowledged that the Olympics are a goal.

And yet even if it didn't mark anything close to the end of the journey, Oct. 8 was the day Macario waited most of a lifetime to live. She never wanted to merely play for the best women's team in the world. She wanted to be an American.

"I think I am almost just even more grateful to be a part of this country this year, exactly because it is built on the people," Macario said. "So for me to be part of that means that I can help change and I can help make this country a better country. Literally that starts with me voting and doing my part as an American citizen and getting my opinion and my vote out there."

Between what preceded it, the protocols necessary to pull it off and the list of attendees, this will be a U.S. training camp unlike any other. But it's also unlike any other camp because it includes one of the newest Americans.

And it's about time 2020 offered up some good news.