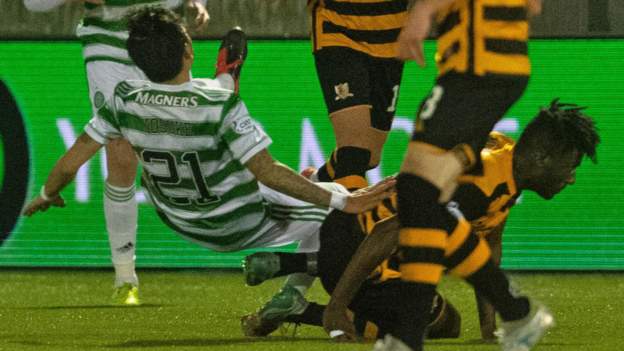 Celtic manager Ange Postecoglou says a lack of protection from the referee led him to tell his players "not to bother going into tackles" near the end of the Scottish Cup win at Alloa Athletic.

Mouhamed Niang has been cited by the Scottish FA for his tackle on Ideguchi.

"I didn't feel there was control of that environment," said Postecoglou.

"The last thing you want is players taking matters into their own hands. You want referees to provide that protection for both sets of players, both from deliberate actions but also sometimes from reckless actions.

"In every country I've managed - even at major tournaments - we sit down at the beginning of the year and the referees show us vision of things they'll be looking for.

"The rules have always had little tweaks but the one consistent theme is that they always show us vision of tackles they deem to be reckless or dangerous which will always get punished because it's a big part of the protection of the player.

"This year was no different and if you show footage of that tackle [Niang on Ideguchi] that's exactly the vision we get shown to know that that's going to get handled by the referee.

"I'll be honest, I told some of the lads towards the end of the game to just not bother going into tackles and to just look after themselves because I didn't want any more injuries.

"Sometimes players are just reckless but that doesn't mean it is excusable. We had a player who had a serious injury, there's a couple of others who were lucky to escape from that and that is why I was disappointed with the way the night panned out."

Niang, who was booked by referee Don Robertson for his challenge on Ideguchi, has been given a retrospective Scottish FA charge of serious foul play, with the hearing set for Thursday.

Postecoglou refused to put a timescale on the absence of McGregor, who suffered a serious facial injury in an aerial collision wit Adam King.

"I don't put on time frames, I am not in the medical profession," he added.

"At the moment all we are just concerned with is Callum McGregor the person. This is not just about football, he has had a significant injury. We just want to make sure he recovers and he feels good."