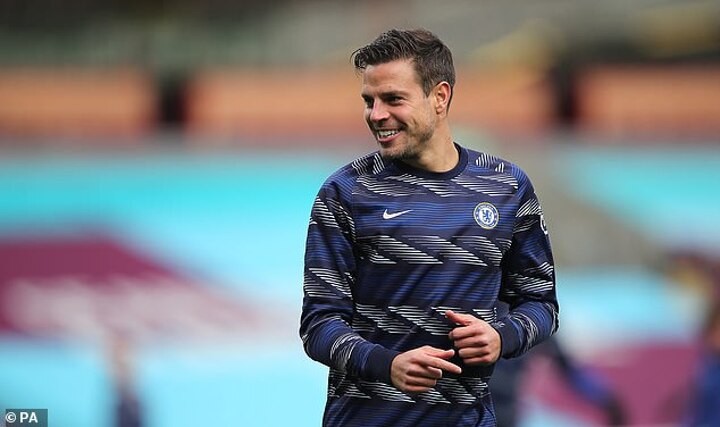 Having gone unbeaten in 10 fixtures in all competitions and winning their past six in succession, Azpilicueta claims Chelsea are in 'good form' ahead of their derby at Stamford Bridge on Sunday.

The Spain international says they will miss the 'special atmosphere at the Bridge', but insists Chelsea are motivated by the prospect of overcoming Tottenham - who currently sit two points ahead at the top of the Premier League table.

Azpilicueta featured in the Chelsea side that came back from 2-0 down against Tottenham to secure a draw and prevent them from picking up the Premier League title in 2016.

Although there is not quite the importance riding on Sunday's game, the match does, however, provide both clubs the opportunity to assert their dominance in the league.

Speaking ahead of the game, Azpilicueta told The Telegraph: 'It's one of those kinds of games when you usually feel a special atmosphere at the Bridge and that game [in 2016], we were having a terrible season, we were losing 2-0 at half-time.

But, in the second half, the electricity around the stadium... I think something clicked that day that even though we were not playing for anything, just to not let Tottenham win the league. It was not only the game, it was the title race as well that they were involved in.

'Every year is different and we had a very good record against them until two or three seasons ago when we lost, but, hopefully, we can keep beating them at the Bridge.

'Since I arrived at Chelsea, I always tried to have the winning mentality of every game to finish at the top for the top trophies.

'That includes being the top team in London and we want to be at the top because that means we are the No 1s. That's what we fight for.

'We are in good form and, hopefully, we can improve on last season and now reach higher levels.'

Tottenham's fixture at the Bridge will also see Jose Mourinho return to his former club.

Mourinho was one of the most successful managers at Chelsea, helping Azpilicueta win one of his his two Premier League titles with Chelsea in 2015.

However, Azpilicueta has played down the significance of playing against the Portuguese manager and insists their focus will be on securing three points.

He said: 'That's football. I think Jose has a great history in Chelsea, but, after, football moves on. We played against him when he was in Manchester United and now he's in Tottenham.

'Obviously, we are professional and we want our team to win and, obviously, I'm sure Jose will want the same as us which is to win the game.

'Any game against Tottenham is always a big derby, we know that everybody wants to be part of it.

'Both teams, we are in really good form. Whatever happens, there is still a long season ahead, but, obviously, in such a big game like this, with both teams coming in this form, it's an important game for everybody and, hopefully, we will be at our best because we will need to be.'