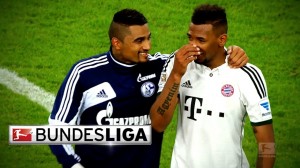 The Boateng brothers have gone their separate ways since setting out on their careers in Berlin a decade ago.

Born to the same Ghanaian father but to different German mothers, they are tall, powerful and swift athletes who played against one another in the last two World Cups.

Kevin-Prince Boateng, older by a year at 27, represents Ghana. JÃ©rÃ´me Boateng was arguably the best defender â€” certainly the quickest â€” on the German team that won the trophy in Brazil two months ago.

But on Wednesday, while wearing different colors, the pair helped Bundesliga teams beat English teams in the Champions League. Kevin-Prince, the more aggressive of the brothers, was forceful, to put it mildly, for the Schalke team, which fought back from a goal down to hold Chelsea to a 1-1 tie in London.

It was JÃ©rÃ´me, however, who stepped out of character to shoot the goal that allowed Bayern Munich to beat Manchester City, 1-0, in Bavaria. It was such an unexpected goal, so late in the contest, that Bayern Coach Pep Guardiola nearly choked Boateng when he jumped on him in celebration and cuffed him playfully around the face.

Put it this way: Guardiola is under pressure to recreate a Munich team half as good as the one he inherited two seasons ago from Jupp Heynckes. That team won everything it could that season: the Champions League, the Bundesliga and the German Cup.

Heynckes retired. He probably knew that his crowning achievement of a long career was being able to goad extraordinary effort and consistency out of Bayernâ€™s mercurial wingers, the Frenchman Franck RibÃ©ry and the Dutchman Arjen Robben.

RibÃ©ry has paid a price. His body has broken under the strain, and he is injured again. Robben is coming back to being fully fit after a superb World Cup with the Netherlands.

Bayern Munichâ€™s German players also are struggling to stay healthy and keep the momentum rolling after so many of them figured in the World Cup victory in Brazil. Bastian Schweinsteiger, the strong man of the national team, was one of six Bayern first-team players seated in the stands Wednesday, watching the start of his clubâ€™s Champions League campaign.

What they were seeing, again, was Germanyâ€™s top club attempting to roll over the English champion, Manchester City. It has been six years since the ruling family of Abu Dhabi began to pour money in to transform City into the top team in Manchester, and therefore a force in Europe.

And in three of the past four seasons, City has been drawn against Bayern in the Champions League group stage. The matchup has become a measure of Manchester Cityâ€™s progress in the worldâ€™s most demanding competition.

Up to this week, Munichâ€™s brand of soccer, combining physicality with sophistication, had been visibly superior to that played by Manchester. Wednesday, though, was more of an even contest.

The home team in the Allianz Arena had the better go at attacking Wednesday. But because Thomas MÃ¼llerâ€™s finishing was less sharp than it was in Brazil, and because Bayernâ€™s new striker, Robert Lewandowski, has not yet hit his full stride, the game remained goalless until the 90th minute.Goalless, but not guileless. City goalkeeper Joe Hart, who has had bad nights against Bayern in the past, was a man inspired as he dove left and right, high and low, to keep a clean sheet.

Poor Joe. He had Boatengâ€™s last-minute shot covered as well until it nicked the back of Bayernâ€™s Mario GÃ¶tze. â€œIt took a nasty deflection,â€ Hart said ruefully immediately after the game. â€œAnd JÃ©rÃ´meâ€™s come back to haunt us at the end. But thatâ€™s football.â€

It is the twist of fate that few saw coming. JÃ©rÃ´me Boateng and Hart were teammates in the City defense four seasons ago before Boateng was summoned to the club where most decent German players end up, sooner or later.

The keeper hadnâ€™t seen Boateng strike a goal in their time together in Manchester, and strictly speaking, he didnâ€™t score in the Allianz either. Boatengâ€™s shot was pure enough, a tremendous volley after Manchester failed to clear a corner that Boateng himself had forced.

But the deviation off GÃ¶tze put the ball out of the keeperâ€™s reach and gave all three points to the Germans. If GÃ¶tze wished to claim the goal, it would more than likely be taken off Boateng. But, hey, Mario GÃ¶tze got the touch that won the World Cup in Rio de Janeiro in July, so the decent thing to do would be to let Boateng finally get his first game-winner for Bayern.

Truth be told, Boateng was again the outstanding defender, as he had been in Rio, where he prevented a certain goal for Lionel Messi in the final against Argentina.

His sibling is more accustomed to goal-scoring, a more attacking player in every sense.

Fans of Chelsea, and of Germany, will not need reminding that it was v whose stomp smashed the ankle of Michael Ballack when Boateng played for Portsmouth and Ballack for Chelsea in the English F.A. Cup final in 2010.

That foul knocked Ballack, Germanyâ€™s captain, out of that yearâ€™s World Cup and effectively ended his international career. There were bad fouls on both sides when Chelsea met Schalke on Wednesday, at least one of them from the elder Boateng.

The contest ended justly enough. Cesc FÃ bregas put Chelsea in front early on, but Schalke struck back when a superb run by Julian Draxler set up Klaas-Jan Huntelaar to tie the score in the second half.

Chelsea had left out Diego Costa, for good reason. His troubled hamstring probably would not survive three games in a week â€” and Chelsea plays Manchester City this coming Sunday.