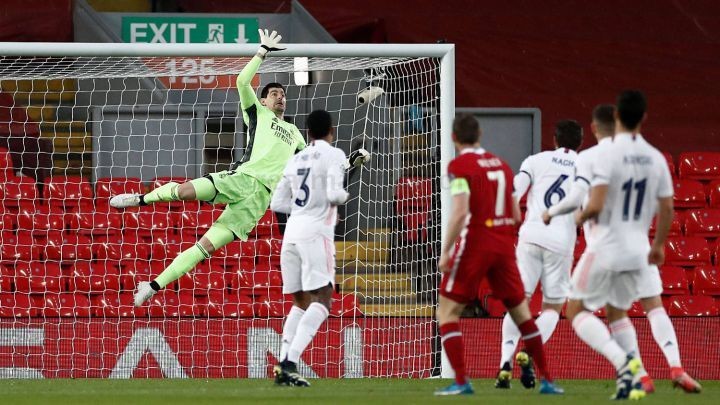 Thibaut Courtois produced a fine display for Real Madrid as Los Blancos knocked out Liverpool to set up a Champions League semi-final against Chelsea.

Real Madrid’s saviour, beginning with the stop with his feet to keep out a golden chance for Mohamed Salah in the second minute. Had the Belgian not kept that out, we might have witnessed a completely different game. Courtois also went on to produce a diving save to parry a James Milner curler that looked destined for the top corner, before beating out a point-blank-range effort from Roberto Firmino and a late chance for Salah. A top display.

Given that he played most of the game out of position, Valverde did really well. In the first half he found it difficult, but after the break he even began to look more comfortable and express himself on the odd forward foray. Produced a terrific pass for Vinicius Junior, who spurned a one-on-one chance. Finished the game in midfield.

A fantastic performance from the Brazilian, who showed his pace on the few occasions when he had to defend the space behind him. Blocked several shots that could have found the net otherwise, and even allowed himself the luxury of the odd pinpoint, 40-yard pass.

Rock solid, just as he has been in every game he’s played in the absence of Sergio Ramos. Together with Militao, he excelled at Anfield.

A contained display - he didn’t show the attacking intent we’ve seen in other games - and not a good one from the Frenchman, whose careless loss of possession late on ended up forcing Courtois into his fourth major stop of the night.

Getting through a game of this intensity with a yellow card to his name is no mean feat. The booking came in the 24th minute, after a challenge on Milner. The Brazilian was also very good with ball at feet, something which he sometimes doesn’t get sufficient credit for.

Uncharacteristically, Modric gave the ball away four or five times in the first half. That said, the off-the-ball pressure Liverpool were applying was at its most intense at that point. When that eased up, we saw more of the Croat.

Not helped by the fact that Madrid were frequently not the team in possession, it wasn’t Kroos’ best game. Madrid boss Zinedine Zidane is trying not to push the German's body too hard and replaced him with 20 minutes to go.

Ran himself into the ground tracking back, just like Vinicius. Also like Vinicius, he was perhaps not at his best when he was in possession precisely because he spent so much time on defensive duties, rather than with ball at feet.

Everything Madrid do seems to improve when he gets involved. The Frenchman conjured up one sparkling piece of play in the first half, twisting and turning the Liverpool defence before hitting the post.

Worked very hard in defence, but once again his finishing was found wanting. He could have killed the tie when clean through on Alisson in the 65th minute, and didn’t.

Zidane’s preference for Valverde over Odriozola says it all. He did get some game time late on, though. He lost the odd dangerous ball, but was very active on his right flank.

Given 20 minutes by Zidane when Vinicius ran out of puff, Rodrygo offered plenty of enthusiasm but produced little in the way of quality.

Was brought on right at the end in a bid to help Madrid keep the ball, but amid one final Liverpool push, he wasn’t able to.