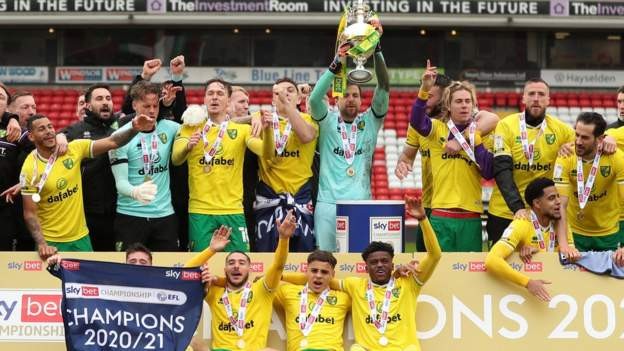 Championship champions Norwich City were held to a draw in an open and entertaining match against a Barnsley side who will face Swansea City in the play-offs after finishing in fifth place.

The Tykes led when Carlton Morris robbed the ball off Andrew Omobamidele and teed up Cauley Woodrow for a simple finish.

A typically classy move brought the Canaries level after the break, when substitute Adam Idah struck from Todd Cantwell's pass, but they were unable to earn a 30th league win of the season.

Barnsley were rewarded for a bright start that saw Chaplin volley over and Jasper Moon's shot was well saved by Tim Krul before Woodrow struck.

Norwich's players and manager Daniel Farke claimed a foul in the build-up but soon drew level through Buendia's 15th goal of the season.

Woodrow and Chaplin both had chances before Chaplin did make it 2-1 from a Callum Styles cross.

Cantwell was just off target with a shot before the break but his clever pass saw Idah fire an effort into the roof of the net for the final goal of the game soon after the interval, his second in three matches.

Barnsley could have snatched all the points but Krul made a fine save to keep out strikes from Victor Adeboyejo and Romal Palmer.

At the other end Jordan Hugill squandered a glorious late chance for the visitors and Buendia was also guilty of a bad miss, but the post-match title celebrations were not affected by their failure to end the season with a win.

Jacob Sørensen (Norwich City) wins a free kick in the defensive half.

Daryl Dike (Barnsley) wins a free kick in the attacking half.