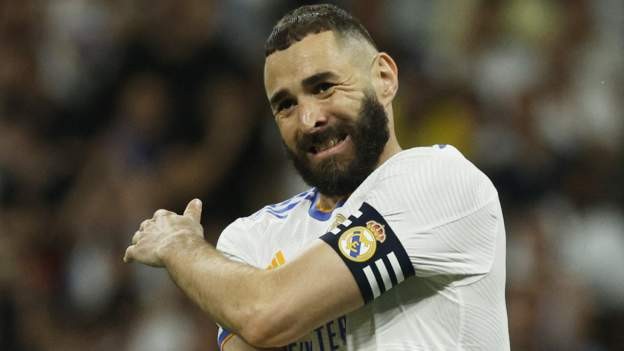 Real Madrid ended their triumphant league campaign with a draw against Real Betis in their final match before facing Liverpool in the Champions League final.

Carlo Ancelotti named his strongest XI for the game between the La Liga champions and the Copa del Rey winners.

Karim Benzema twice went close to scoring but was unable to add to his 27 league goals for the season.

Gareth Bale, who is set to leave Real Madrid, was not involved in the game.

Ancelotti's team wrapped up the title last month with four games to spare but they were unable to end the domestic campaign on a winning note.

They managed just three attempts on target during the 90 minutes, while Betis went close when 40-year-old substitute Joaquin fired narrowly over on his 600th La Liga appearance.

Real Madrid, who finish the league season on 86 points from 38 games, now have a full week to prepare for the Champions League final in Paris on 28 May.

Real Betis are fifth in the table on 65 points although Real Sociedad can draw level on points if they defeat Atletico Madrid at home on Sunday (21:00 BST).

No Bernabeu farewell for Bale

Ancelotti said on the eve of the game that it was important Real Madrid recognise the contribution Bale made to the club and called on fans to give him a fitting farewell in his final home game.

After naming the Welshman in his squad, the Real boss opted not to include him in his 23.

The 32-year-old, whose contract expires at the end of June, has helped the club win four Champions League trophies and scored 106 goals since joining from Tottenham for £85.3m - then a world transfer record - in September 2013.

Bale has been criticised in Madrid for being perceived to be more committed to playing for Wales than Real.

In March, he hit back at Spanish newspaper Marca for a column which described him as a "parasite".

He has played just seven club games in 2021-22 totalling 290 minutes and scored one goal.

Attempt missed. Karim Benzema (Real Madrid) right footed shot from the centre of the box misses to the left. Assisted by Marcelo with a cross.

Attempt missed. Germán Pezzella (Real Betis) header from the centre of the box is too high following a corner.

Attempt missed. Dani Ceballos (Real Madrid) right footed shot from outside the box misses to the left. Assisted by Isco.

Attempt missed. Joaquín (Real Betis) left footed shot from the centre of the box is just a bit too high. Assisted by Borja Iglesias.

Eduardo Camavinga (Real Madrid) wins a free kick in the defensive half.

Attempt missed. Karim Benzema (Real Madrid) left footed shot from a difficult angle on the left is just a bit too high. Assisted by Vinícius Júnior.

Eduardo Camavinga (Real Madrid) wins a free kick in the defensive half.

Attempt missed. Karim Benzema (Real Madrid) right footed shot from outside the box is just a bit too high. Assisted by Vinícius Júnior.