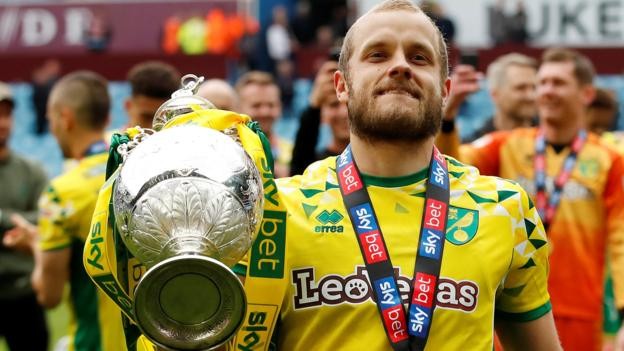 At the start of the season, we gave you the opportunity to have a go at predicting the final Championship table.

A group of 23 BBC Sport journalists who cover Championship football on a regular basis were asked to make their own predictions - and their forecasts were combined to make a final table.

So how did they fare?

In 2017-18, we failed to select a single club in their correct finishing position. We did slightly better in 2018-19, with two correct predictions (West Bromwich Albion and Bolton) and 13 other clubs finishing within three places of our initial forecast.

The less said about our choices for automatic promotion, the better, but we will touch on that later...

Next season, Ipswich Town will play in the third tier for the first time since 1957

Rotherham, Bolton and Ipswich were our three selections for relegation and, sadly for those three clubs, our predictions came true.

Only five of our 23 journalists thought Ipswich would go down, but a high percentage felt they would struggle after manager Mick McCarthy's exit towards the end of the previous campaign.

McCarthy's successor, Paul Hurst, was sacked in October and his replacement Paul Lambert was unable to prevent the Tractors Boys dropping into the third tier.

Ipswich look to future after relegation

Bolton's off-field financial problems were evident before the start of the season and those, coupled with a dramatic escape the previous campaign, persuaded 18 of our reporters to place them in the bottom three.

After winning the League One play-offs, Rotherham battled bravely on their return to the Championship but were relegated with one match remaining.

Many of our mid-table selections proved to be just about correct, give or take a couple of places, while three of the teams we predicted to finish in the play-off spots - Leeds, Derby and West Brom - did so.

But we got plenty wrong too...

Congratulations to Norwich City and Sheffield United, who will be playing Premier League football again next season.

The Canaries confounded many pre-season predictions by ending the season as champions - not least the one from our team of reporters, who had them down for an 11th-placed finish.

Norwich had lost two key creative talents in James Maddison and Josh Murphy to Premier League clubs during the summer and did not spend big to replace them, which might explain why only two of our group had Daniel Farke's men finishing in the play-offs and one even tipped them to be relegated!

Instead, Daniel Farke's mix of bright academy products and astute foreign imports took the Championship by storm. Finnish striker Teemu Pukki proved to be an inspired free transfer, ending as the Championship player of the year and the division's leading scorer with 29 goals.

Chris Wilder has won promotions from the second, third, fourth and fifth tiers of English football

As for Sheffield United, their promotion challenge in 2017-18 had faded in the closing weeks of the campaign and they were tipped to repeat their 10th-placed finish.

Five of our team had the Blades ending in a play-off spot and, like Norwich, one reporter had them to go down.

But there was to be no stopping Chris Wilder's men this term. They held their nerve to see off Leeds in the battle for the second automatic promotion spot and are back in the top flight after a 12-year absence.

How Wilder worked his way up to the Premier League

And you can make it a hat-trick of "clubs that went up but BBC Sport did not put them in their predicted top six" as we had play-off winners Aston Villa to finish eighth.

Honourable mentions must also go to Bristol City, who still had the chance of a play-off place going into the final weekend of the regular season, and Hull, for whom Jarrod Bowen's 22 league goals averted any threat of a relegation battle.

A new manager, a Premier League squad largely kept together and a raft of expensive new signings - the Potters surely had to be in the mix to go up?

It did not quite work out that way.

Initial struggles under Gary Rowett resulted in a mid-season managerial change, but Nathan Jones' arrival did not bring a massive upturn in results.

Their tally of 45 goals in 46 league matches was the third-lowest in the Championship, with only the bottom two clubs scoring fewer.

We predicted Middlesbrough to go up automatically alongside Stoke, but Boro also missed out on the top six altogether - albeit by only one point. A run of six successive defeats in March and April proved to be their downfall.

And with that, another football season is over. The English Football League returns in August and you can be sure there will be more stories, more dreams and more (probably hopeless) predictions to come...