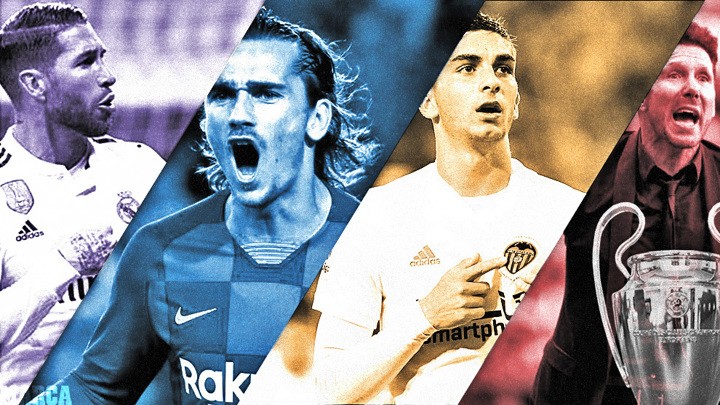 Football has been stopped by the coronavirus but work behind the scenes is continuing at every club.

MARCA have analysed Spain's top eight clubs to take a look into their situations.

They are leading the way and are still one of the favourites for the Champions League, but they're one of the clubs with the most problems.

The current pandemic has them looking into a black hole of 100 million euros, while the board have spent days working on an ERTE for all of their athletes to avoid further issues.

On the pitch, results have been coming but problems are evident as well. Antoine Griezmann isn't delivering what he was signed to do, and Luis Suarez has been sidelined for some time.

Quique Setien needs to find improvements at the back, where they've conceded 31 goals in 27 games so far.

Ultimately, whether the season is a success or not will be decided by what they win, or don't.

Real Madrid have seven things to address, as we recently explained on MARCA.

First up is Luka Modric's future, then the issues of Alvaro Odriozola and Achraf Hakimi, the singing of another forward, Luka Jovic's situation, choosing a second choice goalkeeper, strengthening in midfield and renewing Sergio Ramos' contract.

On top of that, work at the Estadio Santiago Bernabeu has to get back underway and the club want some silverware to add to the Supercopa de Espana.

But Madrid are trailing Barcelona in the title race and have a deficit to overturn against Manchester City in the Champions League.

In short, the Andalusians want to qualify for the Champions League and continue fighting for success in the Europa League as well.

Roma await them in the next round, while they're planning to find a replacement for Ever Banega.

Other notable issues include how this crisis will impact on their strategic planning for economic growth and how their market activity will respond.

It's been an emotional season so far in San Sebastian and they have all eyes on the Copa del Rey, wherein they'll play their eternal rivals in the final.

Martin Odegaard has been their revelation and they'll want him to stay for the extra year agreed when he arrived from Madrid.

The futures of their loanees will need deciding, and they'll have to finalise the work inside Anoeta which has stopped.

Jose Bordalas and his team are experiencing once of the sweetest possible seasons. Right now, on a sporting level, the challenge right now is to make it through their knockout tie in the Europa League against Inter.

In LaLiga Santander, the objective is to finish in the Champions League places.

If either are achieved then extending Bordalas' time at Getafe will be easter. The club also have to address the possible exits of Marc Cucurella and Djene Dakonam.

Right now all the problems faced by Atletico are raised by ERTE. They are waiting on a yes from the players over the potential wage cut.

On the sporting side, Diego Simeone is looking to win something and the Champions League campaign is on track, especially after the sublime exercise in resistance at Anfield. Lifting the famous old trophy would be an coup for a team where Joao Felix is still to find his best form.

More is expected from an offensive standpoint, so defending doesn't become the only tactic which also leads to less dependance on Jan Oblak.

The success against Liverpool has strengthened Simeone's position after receiving criticism for some of the season's performances in LaLiga Santander and the Copa del Rey.

A top four finish is necessary to make sure of Champions League qualification next season, and work on the contract renewals of Thomas Partey and Oblak, and the futures of Thomas Lemar and Diego Costa.

Unless something magical happens in the final months of the season, Lemar is in his last season at the Estadio Wanda Metropolitano, and finding a club for the Frenchman will be one of the hierarchy's main tasks.

Yannick Carrasco must also earn a place in the squad for next season, and finding a potential second choice goalkeeper.

The team are fighting to get into the Champions League since LaLiga Santander is the only competition they have left. Albert Celades' trajectory has been irregular at best, and the defensive has been bleeding goals which has caused them to lose more points than expected.

Emotions at the Mestalla are heated, though have been partly placated by news that Ferran Torres has signed a contract extension. The Valencia hierarchy also need to make a decision about Ezequiel Garay whose contract is coming to an end.

Finally, the club need to make a decision about the stadium. The company that was due to buy the land haven't, and everything is up in the air. Start from scratch, as there are 11 years of broken promises regarding the site.

The objective is nothing more than focusing on the uncertainty the remainder of the season and how that affects the Copa del Rey final.

Everyone is dreaming about taking La Gabarra out again. As for planning, there is a need to rejuvenate the squad, paying special attention to the goalkeeping area and looking for a replacement for Iago Herrerin in case he leaves before the end of his contract. Levante's Aitor Fernandez has already been earmarked.