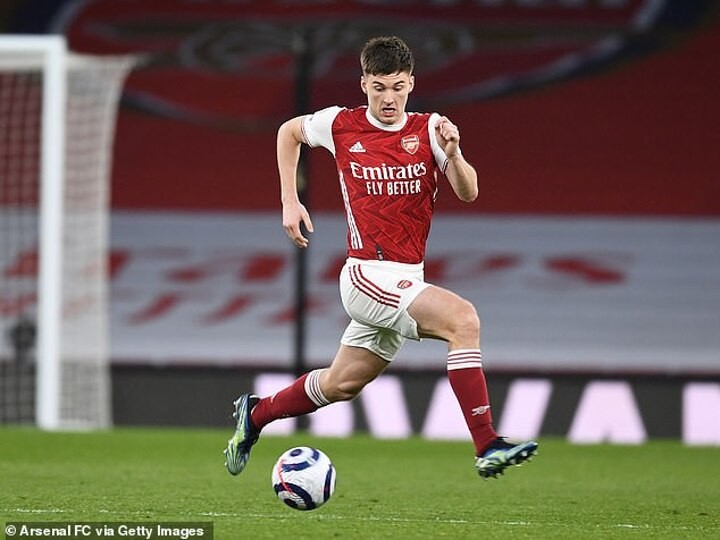 Kieran Tierney is good enough to play for Real Madrid and Manchester City, according to former Liverpool midfielder Charlie Adam.

The Arsenal left-back has been enjoying his best season with the Gunners after overcoming a string of injury set-backs - making 23 starts in this campaign and providing two assists down the flank.

His solid form under Mikel Arteta has earned rave reviews from his fellow Scot Adam, who is tipping the 23-year-old for a big move this summer - and rates him at around £50million.

Adam, who made 37 appearances at Anfield and now turns out for Dundee in the Scottish Championship, called him 'a top player'.

'Would it surprise me if a Real Madrid, a Man City or any of the clubs in the top echelons come in for him in the summer?' he said, as reported by Metro.

'I think he's ready now. He's 23, he signed for Arsenal injured and was out for a spell with groin and shoulders problems.

'But he's come back and has matured into a top player. I believe he can go to the next level again. You're starting at £50m too.'

While Tierney has nailed down regular football this season, he was dealt with another fitness blow after injuring his knee in the 3-0 defeat to Liverpool last time out - and could be out for the rest of the season.

Mikel Arteta has sought to play down fears about the severity of the issue and insists the player is 'feeling better', but added that the club will assess him day by day.

It means Tierney will miss Arsenal's Europa League quarter-final tie against Slavia Prague on Thursday, and will hope to recover in time to feature for Scotland at this summer's Euros.

Adam is not the only Scotman to sing the praises of the full-back, with goalkeeper Craig Gordon hailing him as 'world class' after his starring role in the 4-0 win over the Faroe Islands as he picked up a hat-trick of assists.

‘I thought he was incredible - and he has taken his game on even further,’ said the veteran.

‘He talks so highly of the Arsenal coaching staff and how they have helped develop him. For us, over the last three games he has been excellent - if not the standout in every single one.

‘He has been magnificent and hopefully we can keep him fit and playing at this level.

‘I think he is world class, I really do. He is so consistent as well and that is what makes him so good. He is doing it in every game and he’s a big asset for us on and off the park.'