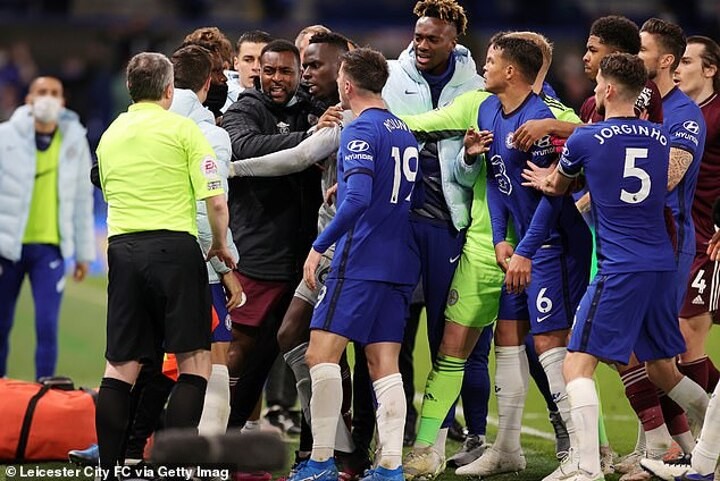 Chelsea and Leicester's players were involved in a lengthy clash at the end of their crucial Premier League fixture on Tuesday as tempers flared at Stamford Bridge.

Thomas Tuchel's side took a huge step towards Champions League qualification with a 2-1 victory, which sees them leapfrog the Foxes into third place.

Things got heated towards the end of the game when Ricardo Pereira caught his former Leicester team-mate Ben Chilwell with a late tackle, resulting in a mass touchline brawl.

Antonio Rudiger reacted by squaring up to Pereira before the clash evolved into a bigger altercation between the other players, coaches and substitutes.

Daniel Armartey, who was an unused sub for the Foxes, was booked for his involvement in the scrap while Pereira was shown a yellow card for the foul on Chilwell.

Tuchel played down the clash in his post-match interview, telling beIN Sports: 'I didn't see what happened [at the start] but it's tough to be behind, to lose big matches.

'Things got a bit heated but nothing special. You like to report about it and that's the way it is.'

Chelsea took revenge for their FA Cup final defeat by Leicester and the victory puts them in pole position to finish in the top four.

The Blues are one point ahead of Brendan Rodgers' side and four clear of Liverpool, who play Burnley on Wednesday.

Tuchel's side took the lead when Rudiger headed in from a corner at the start of the second half before Joringho converted a penalty in the 66th minute.

Kelechi Iheanacho pulled a goal back for the Foxes with 15 minutes remaining but the Blues held on to take all three points.

Tuchel insisted his side cannot afford to celebrate despite the win over their top four rivals.

'It was a strong performance and well deserved performance,' he said.

'No time for celebration, the job is not done yet, two more games to go.

'Very happy to play in front of supporters, it was a huge difference today.'