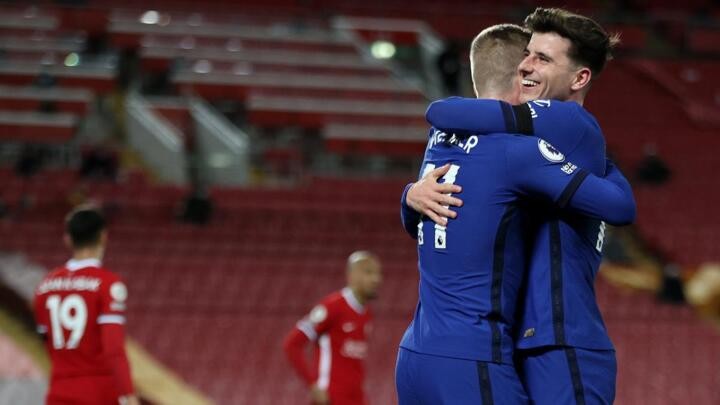 Thomas Tuchel's men continued their renaissance with a deserved win at Anfield while the hosts plumbed new depths.

A teamsheet that showed Olivier Giroud swapped out for Timo Werner at centre-forward provided early notice of the visitors' approach to a crucial game.

Clearly, Thomas Tuchel had looked at a Reds backline that, even with Fabinho restored, would still feature the unconvincing Ozan Kabak and smelled blood.

He had also spotted a weakness in a midfield trio of Georginio Wijnaldum, Thiago Alcantara and Curtis Jones that, despite some decent individual performances of late, has proved itself incapable of pressing well as a unit.

And so he set about exposing a fragile backline with a combination of pace and pressure-free passes from the centre of the park.
The value of this setup almost told early in the first half, only for a farcical offside decision to deny Werner and Chelsea a deserved goal.

But the visitors did get their breakthrough before half-time, working the ball all too easily through a loose opposition midfield before Mason Mount finished well.

Struggling at the back and in the centre, Liverpool were equally unimpressive at the top end of the pitch, clocking up just 0.07xG to Chelsea's 0.65 in the first half.

And when your issues span from front to back in that manner, it all adds up to a team that simply isn't good enough to finish in the top four.

For Liverpool, that represents a sizeable failure worthy of self-reflection that must go further than simply blaming some poor fortune with injuries.

Fortunately for Chelsea, they look increasingly unlikely to be engaged in any such post-season inquest.

The Blues' improvement on the defensive side of the ball told again here and, while there is some way to go in attack, they look to have enough to qualify for the Champions League.

The sheer quality they possess in comparison to the likes of West Ham and Everton makes them favourites for fourth place.

Perhaps most importantly, a place in the top four would ensure Tuchel has the funds to continue building on what are strong foundations.

The aim, of course, is to quickly get Chelsea back challenging for the trophies Liverpool won over the course of the last two seasons.

And they certainly look closer to reaching that point than the team they so convincingly dispatched at Anfield.