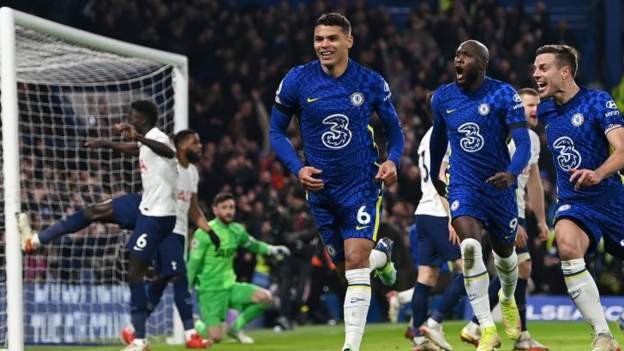 Hakim Ziyech scored for the second game in a row, after also finding the net in a 1-1 draw at Brighton on Tuesday

After a goalless first half, Ziyech scored within two minutes of the restart, superbly curling the ball into the top corner from 20 yards after a fine run from Callum Hudson-Odoi.

In the first half, Tottenham thought they had taken the lead as Harry Kane slotted the ball past Kepa Arrizabalaga, but the goal was ruled out as the England striker was adjudged to have pushed Silva to the ground.

The victory comes after Chelsea won both legs of their Carabao Cup semi-final against Spurs, winning 3-0 on aggregate to set up a Wembley final against Liverpool.

This defeat was Tottenham's first in the league since Antonio Conte, a Premier League and FA Cup winner during his spell in charge of Chelsea, replaced the sacked Nuno Espirito Santo in November.

Chelsea v Tottenham as it happened, plus reaction and analysisGo straight to the best Chelsea contentVisit our Tottenham page

For Chelsea this was a welcome return to winning ways in the league.

They were top of the Premier League after a 2-1 win at Watford on 1 December but a run of only 11 points from their next nine games has severely damaged their hopes of becoming English champions for the first time since Conte guided them to the title in 2016-17.

They remain third and are 10 points behind leaders Manchester City, although Thomas Tuchel's side will not play in the league again until 19 February as a result of their participation in the Fifa Club World Cup, following their Champions League success.

Conte opted for a back four, the first time he had done so in a league game at Tottenham, as he looked to keep it tight and hit his former team on the counter attack.

But the hosts nearly broke through inside the opening minute when Romelu Lukaku shot over on the turn, before Chelsea failed to convert further chances through Hudson-Odoi, Silva and Ziyech.

Lukaku, who has only scored eight times in 24 appearances in all competitions following a £97.5m move from Inter Milan last summer, had another glorious chance following good work by Mount, but missed the ball when eight yards out.

Harry Kane thought he had given Tottenham the lead in the 39th minute, but saw the goal ruled out for a push on Thiago Silva

While Conte was unhappy with the officials for ruling out Spurs' first-half goal, Tuchel was also furious that Japhet Tanganga, who had already been booked, was not shown a second yellow card when he had a hold of Hudson-Odoi's shirt late in the first half.

It was the second time Chelsea thought their opponents should have had a player sent off after Matt Doherty had earlier caught Malang Sarr by standing on his ankle with a challenge - but a video assistant referee check decided it had been accidental.

However seventh-placed Tottenham, who would have moved into the top four with a win, saw their resistance broken early in the second half thanks to Ziyech's wonder strike, before Silva's goal took the game beyond them.

Chelsea could have won by a bigger margin as Lukaku, Mount and Cesar Azpilicueta missed chances.

Tottenham scored two injury-time goals in their last match to come from behind and beat Leicester 3-2 in a remarkable match on Wednesday but there was to be no dramatic repeat at Stamford Bridge.

Arrizabalaga did well to keep out Kane's powerful header late on as Chelsea maintained their clean sheet for their first Premier League win in three matches.

Pierre-Emile Højbjerg (Tottenham Hotspur) wins a free kick in the attacking half.

Ben Davies (Tottenham Hotspur) wins a free kick in the defensive half.

Attempt saved. Harry Kane (Tottenham Hotspur) header from the centre of the box is saved in the top right corner. Assisted by Harry Winks with a cross.

Attempt missed. Steven Bergwijn (Tottenham Hotspur) right footed shot from outside the box is close, but misses to the left. Assisted by Harry Kane.

Steven Bergwijn (Tottenham Hotspur) wins a free kick in the defensive half.

Harry Kane (Tottenham Hotspur) wins a free kick in the defensive half.

Attempt saved. Mason Mount (Chelsea) right footed shot from a difficult angle on the right is saved in the bottom right corner. Assisted by Hakim Ziyech.