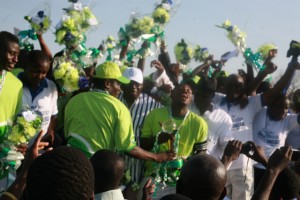 Berekum Chelsea were officially presented with the 2010/2011 league trophy in a coronation game against Aduana Stars on Sunday.

The match at the Golden City Park in Berekum ended in a 1-0 win for the newly installed Glo Premiership champions with the sole strike coming from captain Abdul Basit.

The Berekum township has come alive since Friday as the nation's top football officials trooped-in in drones to witness the historic occasion.

First, the route to the match venue was decorated with various Chelsea paraphernalia with the inscriptions of champions.

The playing body then made a grand entry to the stadium as they drove in fleets of Â limousines.

The game itself however failed to live up to its pre-match billing but had occasional flashes of brilliance.

Nevertheless the partying crowd were least worried by the quality of play and their course was helped with Basit's strike 15minutes from time.

Chelsea's feat represents the second successive time a side from the Brong Ahafo Region have annexed the premier league title with the first being their opponent Aduana Stars - shuttering the duopoly of Hearts of Oak and Asante Kotoko in the process.