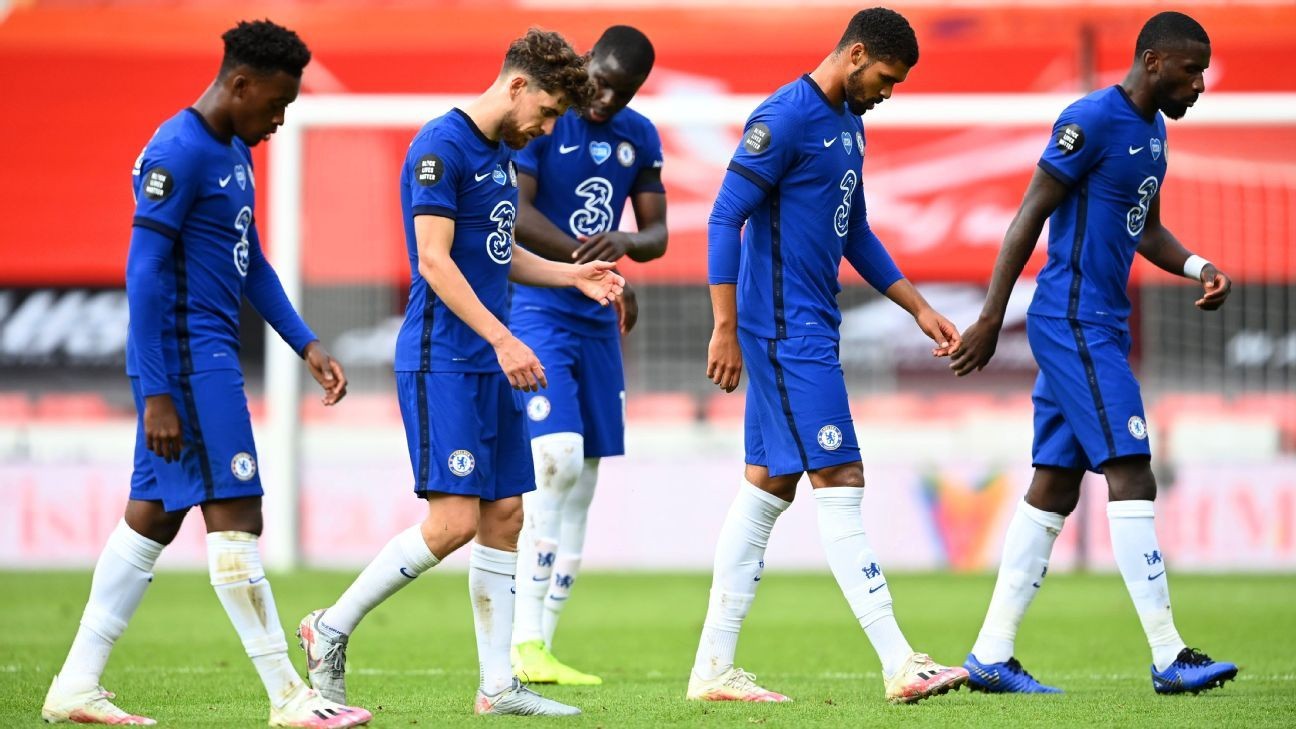 Chelsea were humiliated at Bramall Lane in the Premier League on Saturday night as Sheffield United registered a dominant 3-0 win. David McGoldrick grabbed a brace by scoring either side of half-time, while Oliver McBurnie's strike after the half-hour mark all but put three points out of a lacklustre Chelsea's reach. Frank Lampard's side remain third in the Premier League table, two points clear of fifth-placed Manchester United, who play on Monday.

Though Chelsea suffered a poor loss, they dominated possession and registered six more shots than their northern rivals. Those stats present challenges themselves, though, as Lampard's squad failed to rubber stamp their authority on an important game which they could be made to reflect on at the end of the season. Defensively, little can be said in a positive light.

All over the pitch there were problems for Chelsea, and now their Champions League qualification hopes hang in the balance. Defensively, Chelsea were let down massively by the ball-watching Kurt Zouma and unbalanced substitute Antonio Rudiger. Up front, Tammy Abraham's poor run continued with a lack of clear chances, while Sheffield were allowed to control the game in the midfield to end the night with a comfortable win.

5 -- A game that Lampard will quickly want to forget as his side's defensive woes extended for another week. Additionally, the Blues struggled up front -- something they have relied on in recent weeks in order to keep on top of their Champions League ambitions for next season.

GK Kepa Arrizabalaga, 6 -- Fault cannot be pinned on Kepa for either of Blades' first-half goals. Will be frustrated to again be let down by a poor defensive line and often found himself in helpless situations after making some eye-catching saves.

DF Reece James, 6 -- Tricky to be too hard on James as his creative forward runs down the right occasionally put pressure on the hosts' resilient back five. Saying that, James played McGoldrick onside for Blades' first and remains a part of Chelsea's defensive unit that needs improving.

DF Kurt Zouma, 4 -- Atrocious marking before McBurnie doubled Blades' lead would've no doubt frustrated Kepa behind and those watching on TV at home. Another lacklustre display that needs to be improved upon, not helped when Sheffield added a third late on.

Pulisic: I'm not comparing myself to HazardNew twist in Thiago to Liverpool; Chelsea look to land rising Monaco starEuropean seasons resume: What you need to know, day-by-day

DF Andreas Christensen, 5 -- What applies to Mount can be said for Christensen too. Multiple times he lacked concentration at key moments and Christensen was caught ball watching in the build-up to Blades' second goal too. Subbed at half-time.

DF Cesar Azpilicueta, 5 -- Contributed very little to what was an appalling overall display by a Chelsea side whose confidence will have taken a hit from today's result. Marking wasn't on point and furthermore found himself bullied by Blades' forward men, who rather controlled the game when in possession.

MF Ross Barkley, 5 -- Too ambitious at times, to the detriment of Blues' threat up front. Can improve his game by taking the time to look up and pick out the better option to pass as opposed to shooting from deep. Some fans questioned his selection, and those calls were perhaps justified.

MF Jorginho, 6 -- Ambition didn't lack from Jorginho's game, and he perhaps falls into the same bracket as Christian Pulisic with players around him not helping his individual output. Punted long balls forward and slotted behind his focal point to support another sub-standard defensive unit.

MF Mason Mount, 5 -- His removal from Blues' XI at half-time was perhaps justified due to a couple of poor giveaways of possession. The first went without punishment, but Sheffield's forwards pounced on a loose ball of the edge of the box to score later on. Will enjoy better afternoons.

FW Willian, 5 -- Though Chelsea's attempts at goal didn't suffer, the quality of finishing really lacked and Willian's creative runs at the defence never really threatened Chris Wilder's men. Little more to add in what was a poor game all round for the visitors.

FW Tammy Abraham, 4 -- Picked in favour of Olivier Giroud, a decision Blues chief Lampard perhaps regretted at half-time as breakthrough runs and shots on target were noticeably void from his game. Plenty of frustration among supporters that he remained on the pitch as long as he did.

FW Christian Pulisic, 6 -- Perhaps the only bright spark for Chelsea in what was a drab opening half for the visitors. Pulisic lacked support from his forward partners Willian and Abraham and his individual performance suffered as a consequence.

DF Marcos Alonso (for Mount, 45), 6 -- Quiet game, though he didn't disgrace himself as much as his teammates.

DF Antonio Rudiger (for Christensen, 45), 5 -- Found himself totally wrong-footed in the build-up to Blades' third goal and consequently gifted possession away in a cheap area of the pitch.

FW Olivier Giroud (for Pulisic, 66), 6 -- Injected a minimal amount of threat into Blues' game when he came on possibly an hour too late for Pulisic.