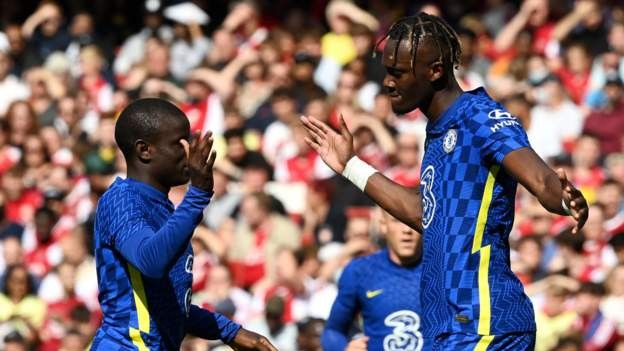 Tammy Abraham scored the winner as Chelsea beat Arsenal 2-1 in a pre-season game at Emirates Stadium.

Abraham pounced on Hector Bellerin's loose pass before firing home from just inside the area with 18 minutes left.

The Gunners lost midfielder Thomas Partey to an ankle injury in the first half following a challenge by Ruben Loftus-Cheek.

Mikel Arteta's side thought they had levelled late on when Joe Willock's shot hit the underside of the bar and appeared to bounce over the line, but goalline technology was not in use and the goal was not given.

Arsenal summer signings Ben White, Albert Sambi Lokonga and Nuno Tavares all came on as substitutes for their home debuts.

England international White, a £50m capture from Brighton, was quickly into the action, doing well to clear Hakim Ziyech's effort off the line early in the second half.

More than 20,000 fans attended the game at Emirates Stadium following the relaxation of UK government coronavirus restrictions, the biggest attendance at the ground since March 2020.

Elsewhere on Sunday, goals from Fabio Silva and Ruben Neves earned Wolves a 2-1 friendly win at Championship side Coventry.

The man who introduced Joe Wicks to meditation: Exploring spirituality and mindfulness with Russell BrandThe Ancient Olympics: You're Dead To Me explores how even death couldn't stop you winning