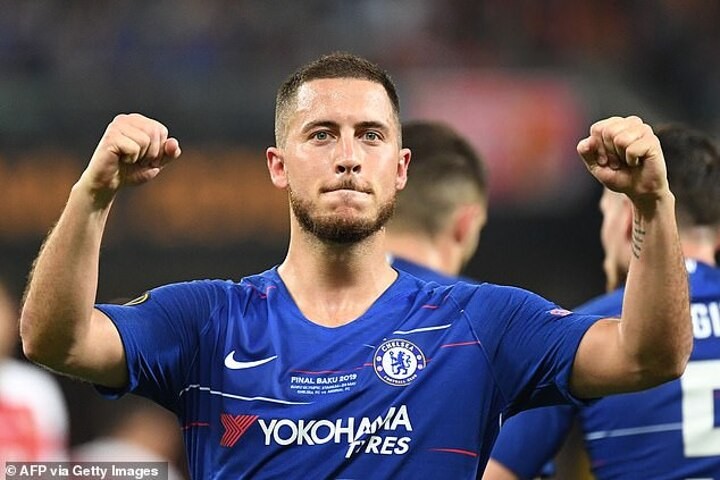 Chelsea are reportedly weighing up a stunning £51million move to bring Eden Hazard back to Stamford Bridge this summer - but it would be a divisive deal despite the Belgian's hero status at the club.

Hazard has suffered a dismal spell at Real Madrid since leaving Chelsea for £130m in 2019 and has scored just one league goal, with his spell blighted by injuries, poor displays and severe criticism from fans and the Spanish press.

He will go down as a club legend with Chelsea having netted 110 times and helping them win six major trophies, but supporters may be on the fence about whether it's the right time for a homecoming.

Chelsea fan RORY JENNINGS gives his verdict on the possibility of Hazard making a swift return to the Bridge after just two years in LaLiga.

'Don't go back' is a mantra I think is generally worth adhering to.

It's not exclusive to football – it can be applied to jobs and ex-girlfriends – but I also think it works especially well where footballers are concerned. There are of course exceptions and caveats (Paul Pogba to Manchester United springs to mind), but generally speaking, I think it's best avoided.

However, the romanticism that exists in football is something that I hold very dear, and therefore the thought of bringing back any of Chelsea's heroes to Stamford Bridge awakens something within me. But that doesn't make it rational or sensible.

The correct thing for Chelsea is not to go near Eden Hazard. He has scored five goals in two seasons, he can't keep fit, Real Madrid are desperate to get rid and I think you could make a case that Christian Pulisic or Callum Hudson-Odoi are better options.

We have to ask - what sign does it send to our academy players?

This summer alone, we are haemorrhaging talented lads who think their path to the first team is blocked.

Fikayo Tomori and Marc Guehi have led the charge out of Cobham, to the dismay of those of us who were looking forward to seeing such talented young players thrive in the heart of the Chelsea defence.

I hoped Mason Mount and Co would have set the precedent to show that the youngsters coming through from Cobham can break through to the first team. The fact that so many young boys who are attached to the club feel the need to leave is a heartbreaker.

For us to sign a 31-year-old for £51million fresh from two years without so much as an impressive performance is ridiculous when you think of the talent we have coming through – and what impact such a signing may have on their first team aspirations.

However, when Hazard is on song there is nothing like it.

In the club's long and esteemed history, only Gianfranco Zola has arguably been better than him with the ball at his feet.

Hazard is a truly mesmerising player who I believe had the talent to be the best footballer in the world.

Why he never quite reached that level and his current state can be debated for eternity, but what isn't up for debate is how good he was for Chelsea.

It was made all the more impressive by the fact that he was often forced to link up with Alvaro Morata and Willian.

Nostalgia and romance is a truly wonderful thing, and even writing those moments out, thinking back on such fantastic memories conjures up glorious feelings.

I've tied myself in knots simply writing this, I started off by saying that I don't think you should go back.

But having immersed myself in Hazard memories for the past 20 minutes, I now think: sod it, get him back ASAP and while we are at it… what's Ashley Cole up to?