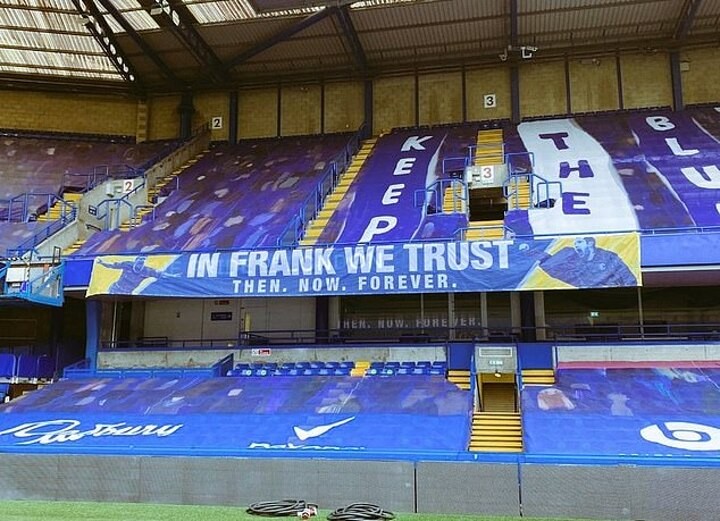 Chelsea fans intend to keep flying the 'In Frank We Trust' banner at Stamford Bridge despite Lampard being sacked as boss, Sportsmail can reveal.

The club legend was relieved of his duties on Monday afternoon after a dismal run of results saw them slip out of the Premier League title picture and down to ninth in the table.

News of Lampard's dismissal - which came 24 hours after the banner was first unveiled and he had guided the team to a 3-1 FA Cup win over Luton - came much to the dismay of the majority of supporters.

Many fans felt the Chelsea hero deserved more time to turn things around but Roman Abramovich, who is notorious for firing managers, took decisive action after growing frustrated with Premier League results.

However, Richard Weekes, 31, from the We Are The Shed group who organised the banner, has insisted they will continue to fly it at Stamford Bridge.despite his departure.

He said after Lampard's sacking: 'To say we are disappointed with the decision is not enough.

'The club tempted us with the idea that finally a manager would have time, that youth would get a chance, only to revert back to their old ways the second it got real.

'The board have a lot to answer for and that is being very very polite. Chelsea will never change, and that finally hit home today to the supporters.'

Lampard is revered by Chelsea fans after winning 13 major trophies with the club during his successful 13-year spell at the club as a player.

'Everyone here would like to express their grateful thanks to Frank Lampard for everything he has done as a player and tried to do as the club's manager,' Chelsea fanzine cfcuk wrote on Twitter.

'Those at cfcuk feel that Lampard should have been given sufficient time to finish the project he laid out to the board when he was first appointed for the role.

'This will be remembered as one of the very worst days in the club's history.'