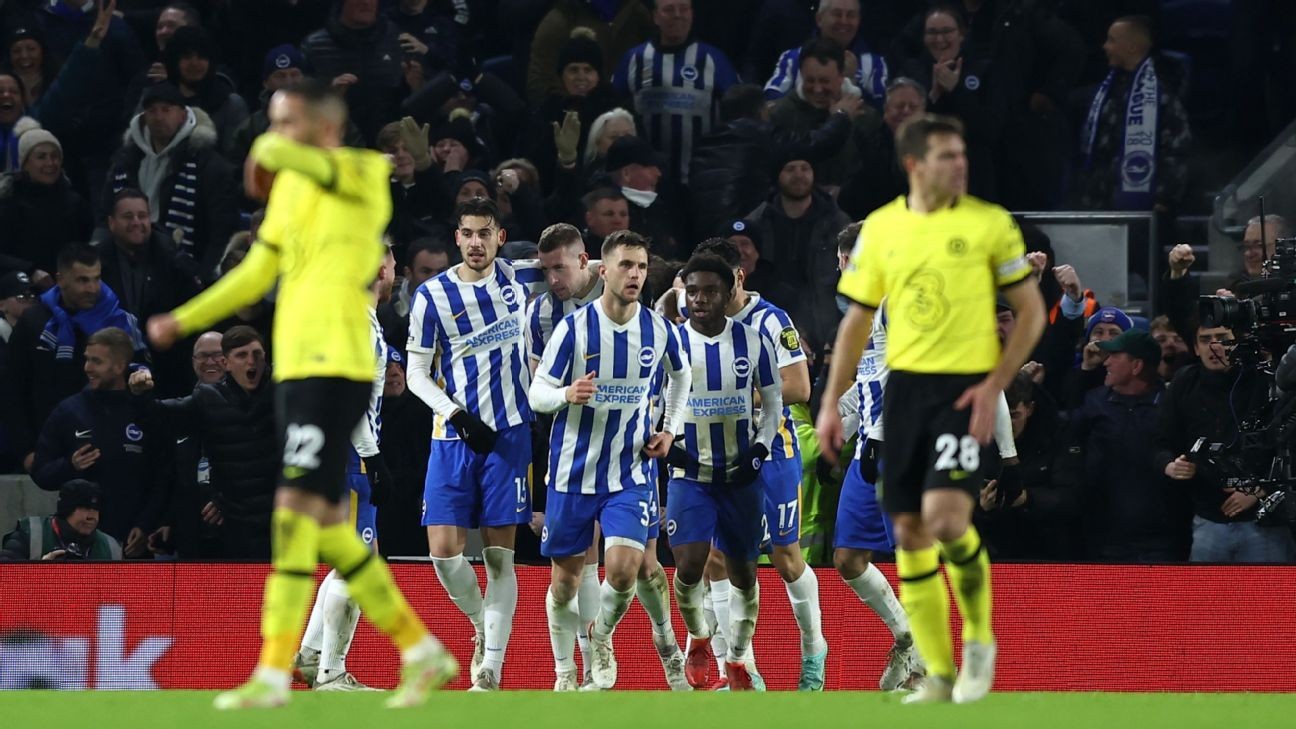 Chelsea remain third in the Premier League after drawing to Brighton on Tuesday. Getty

Chelsea's winless run in the Premier League stretched to four matches on Tuesday, as a 1-1 draw away to Brighton & Hove Albion saw their slender titles hopes suffer yet more damage.

Winger Hakim Ziyech's opportunist strike gave Thomas Tuchel's side the lead against the run of play in the 28th minute.

But Brighton were rewarded for their endeavour when defender Adam Webster thundered a header past goalkeeper Kepa Arrizabalaga on the hour mark after some intense home pressure.

Chelsea began to dominate late on but could not force a winner as Brighton dug deep to preserve their point.

Chelsea's last win in the Premier League came in a 3-1 victory over Aston Villa on Boxing Day, since gaining three points from the last 12 available.

They remained in third place with 44 points, 12 behind leaders Manchester City having played a game more. Liverpool are second with 45 points having played two games fewer than Chelsea.

Brighton, who are in ninth place, have now drawn 11 games this season, and Webster said they were disappointed not to get all three points against the European champions.

"I think for the whole game we were the better team. They had a spell at the end but other than that we were the dominant team and on another day hopefully get three points," he said.

For all Brighton's bright approach play early on they struggled to land a telling blow and were stunned when Ziyech took aim from 25 yards and rifled a low shot that keeper Robert Sanchez could have done better with.

Brighton began the second half on the front foot and Danny Welbeck was played in by Pascal Gross but the striker got his angles wrong and blazed wide.

Just before the hour mark Alexis Mac Allister was picked out by the lively Marc Cucurella but his deflected shot was clawed away by Arrizabalaga.

From the resulting corner Webster thundered a header into the net after finding space in the area.

Striker Romelu Lukaku had a chance to restore Chelsea's lead from a clever lobbed pass by Antonio Rudiger but could not beat Sanchez and the Belgian was substituted soon after.

Tuchel sent on Kai Havertz and Timo Werner from the bench, and Brighton were hanging on at the end but a Chelsea victory would have been undeserved after another frustrating display.

"We looked tired," Tuchel said. "We tried everything but you could see we are mentally and physically tired."