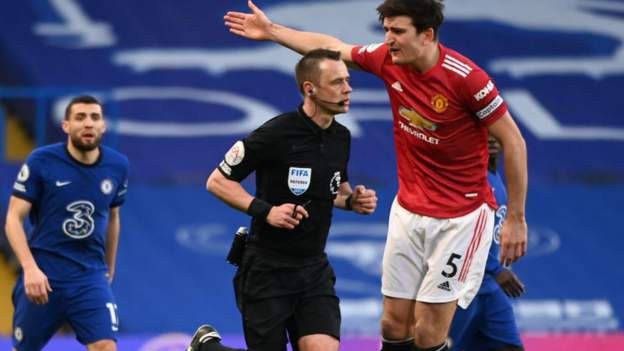 Ole Gunnar Solkjaer's side remain second but are now 12 points adrift of City while the result left Chelsea outside the top four a point behind West Ham United.

Manchester United - who have lost only one of their last 20 league games - thought they were about to be offered the chance to make a breakthrough in the first half, but a penalty appeal for handball against Callum Hudson-Odoi was dismissed by referee Stuart Attwell after he was instructed to consult a pitchside monitor by the video assistant referee.

Chelsea, who remain unbeaten under new manager Thomas Tuchel, had chances but United keeper David de Gea made a fine second-half save from Hakim Ziyech while opposite number Edouard Mendy saved well from Scott McTominay and Fred was narrowly off target with a long-range effort. Mendy also punched away a late effort from Bruno Fernandes.

In the end, however, this was another game to add to the list of meetings between the so-called top six that ended in stalemate.

Chelsea tough to beat under Tuchel

Chelsea will feel a sense of disappointment at not getting the victory that would have moved them into the top four, but this draw means it is now nine matches without defeat for manager Tuchel since he succeeded sacked Frank Lampard in January.

Tuchel has made Chelsea resilient and tough to beat but they lacked a cutting edge here and moments of discomfort were rare for Manchester United's defence and they can have no complaints because they did not deserve victory.

It has still been a promising start for Tuchel. He has toughened up Chelsea and with the attacking talent at his disposal they are in a good position to make a serious bid to move into the top four, while they still have high ambitions in the Champions League and FA Cup.

Tuchel is slowly but surely making his mark and Chelsea can feel in upbeat mood about the weeks ahead.

Manchester United's title aspirations flickered briefly when then went top after a draw at Liverpool in January - but all logic suggests they have been snuffed out now with the Premier League crown heading back to Manchester City.

United's statistics are impressive, they are now unbeaten in 20 league matches away from Old Trafford, a sequence that includes 13 wins, but they have never truly showed the belief and ruthless edge of potential champions.

And here, while they certainly deserved their point, United again failed to provide the final flourish that could have turned one into three.

Solskjaer's side are certainly on an upward curve but this uninspiring encounter was further proof that any title talk was little more than a pipe dream and a serious gulf in quality still exists between Manchester United and Manchester City.

The two meet in the Manchester derby at Etihad Stadium next Sunday - and with the gap between the teams now 12 points City may just view it as the opportunity to kill off any lingering questions about the destiny of the Premier League this season.

Attempt saved. Fred (Manchester United) left footed shot from outside the box is saved in the top centre of the goal. Assisted by Bruno Fernandes.

Attempt saved. Mateo Kovacic (Chelsea) right footed shot from outside the box is saved in the bottom right corner.

Harry Maguire (Manchester United) wins a free kick in the defensive half.

Luke Shaw (Manchester United) wins a free kick in the defensive half.

Attempt missed. Christian Pulisic (Chelsea) right footed shot from outside the box is too high. Assisted by Andreas Christensen.

Attempt saved. Timo Werner (Chelsea) left footed shot from the left side of the box is saved in the centre of the goal. Assisted by N'Golo Kanté.

Attempt missed. Andreas Christensen (Chelsea) header from the centre of the box misses to the left. Assisted by Mason Mount with a cross following a set piece situation.

Harry Maguire (Manchester United) is shown the yellow card for a bad foul.

Sounds of the Nineties: Weezer, Green Day and more on the ultimate pop-rock mixtapeNintendo Nostalgia and games for phones: Press X to Continue hosts Tom Grennan