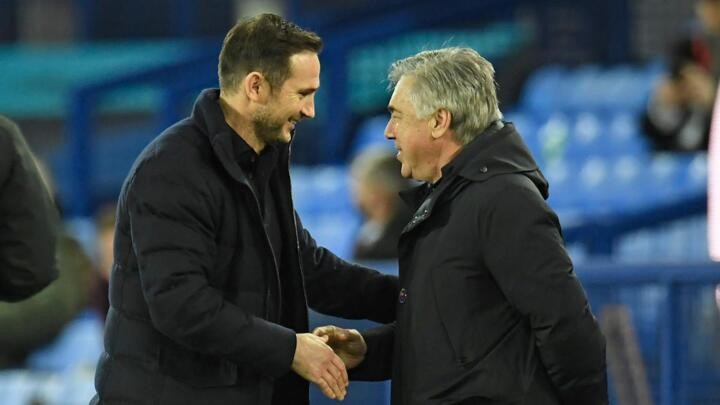 Chelsea sacked Frank Lampard on Monday but Carlo Ancelotti says they are no more difficult to manage than any other club.

Frank Lampard did not take the Chelsea job too soon and will make a swift return to management, according to Carlo Ancelotti.

Chelsea sacked their all-time leading goalscorer Lampard on Monday just 18 months after he arrived from Derby County, where he began his career as a coach one year prior.

He steered the Blues to a top-four finish in the Premier League and to the FA Cup final, but a run of two wins in eight top-flight games left them 11 points off leaders Manchester United in ninth.

Ancelotti, who coached Lampard for two years at Stamford Bridge, does not think Lampard was too inexperienced for the role.

"No, I don't think so," the Everton boss replied when asked if Lampard had taken the Chelsea job too soon. "I think where you start a career as a manager or a player, every career you don't have experience.

Ancelotti considers being sacked to be part and parcel of football management and does not think it will take long for Lampard to find another position.

"It's not unusual that a manager is sacked. Frank Lampard knows this. My personal opinion is that getting sacked is part of our job. We have to understand this," said Ancelotti.

"I was sacked everywhere, so I have to consider the fact it's part of our job. Frank will soon find another opportunity because he's a good manager. He did well at Chelsea but for the club it was not enough. It's simple.

"In the end it's not sad news. One door closes and for him that is Chelsea – I understand that Chelsea was his club, he played for them, but for sure he is going to have another opportunity soon."

Jose Mourinho is the only manager to have led Chelsea for more than two consecutive seasons – he did it in both his stints at the helm – since Roman Abramovich bought the club in 2003.

However, Ancelotti does not consider the Blues to be a tougher place to work.

"Chelsea is not more difficult than other clubs, it's the same," he said.

"Every club has expectations and when things aren't going how they like, what are they going to do? They are going to change 20 players? The easiest way is to change the manager.

"This is what happens in football. All managers know this. We have to consider this part of our job and nothing more."