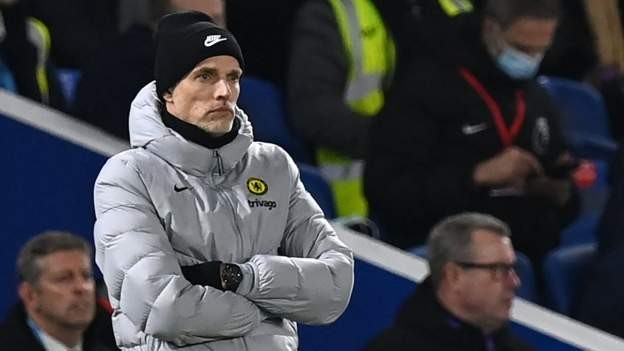 Thomas Tuchel said Chelsea's players are "tired mentally and physically" after their 1-1 draw at Brighton left them with just one win in seven Premier League games and 12 points adrift of leaders Manchester City.

The Blues led against the run of play at the Amex Stadium through Hakim Ziyech's low drive, but failed to hold on, conceding a second-half header to Adam Webster from a corner.

They have now taken just three league points from a possible 12 in a 21-day period that has seen them play seven matches in all competitions.

While they continue to fight on other fronts - including the Carabao Cup, in which they qualified for the final last week - their attempts to keep pace with an imperious City look forlorn.

They must also now be mindful of the sides below them, with Arsenal nine points behind and Tottenham 11 having played three and five fewer games respectively.

"We look tired because we are tired and we play against a strong, well-prepared Brighton team," Tuchel told BBC Radio 5 Live.

"If you look at our schedule, look at where we come from, we struggle with it. When you're tired - mentally and physically - you have a lack of position and a lack of focus. You can see it in our game but we know where it comes from.

"It's like this since November. We are the team that plays and plays and plays so you feel it, of course. That's why we need to de-connect, recharge the batteries and come back with hunger and joy to fight these matches. It's necessary."

Tuchel has given his squad the next two days off to try to recover before they begin preparations for their home league game with Tottenham on Sunday - their 21st game since the start of November.

The third international break of the season follows this weekend's round of fixtures.

"We give two days off because we have four days between matches," continued the German. "Then we'll use the international break to recharge our batteries. We will give the players one week off, absolutely."

Chelsea were second-best for much of Tuesday's game and were fortunate to come away with a point.

Brighton are in good form, five games unbeaten, and played with an energy and confidence lacking in the visitors.

"They played it like a cup game," said Tuchel. "The crowd celebrated the draw in the end like it was a victory. It's difficult to play here anyway.

"We can do much better. I can see it, we try everything. It is not a lack of ambition, it's a lack of what we can do tonight.

"We made a lot of easy mistakes but I know where it comes from so no harm done. We don't need to sugar-coat it.

"We had our moments and even in the end of the game, surprisingly, we felt maybe we could escape with a victory because we have the individual quality. We came and did not lose."

It means Brighton have now drawn with Chelsea twice in 21 days, coming from behind both times, with Danny Welbeck heading an injury-time leveller at Stamford Bridge on 29 December.

"We are not happy of course," goalkeeper Kepa Arrizabalaga told BBC Match of the Day. "We dropped two points in both games. We scored first, we were in a good position to control the game, but they played a very physical game - one against one across the pitch.

"We need points because we want to be top of the league. We have to look at ourselves and we have to improve and step up.

"We are honest. I think we are in a good position in all the competitions. We are in the Champions League. We are in a cup final, but in the league we dropped points in the last month, so we have to get back in the winning ways because everybody is coming."

'Chelsea are looking behind them now'

We are in a difficult world where Chelsea have had injuries and a Covid situation.

No player goes into a game not wanting to win or play to their best but the intensity wasn't there. They couldn't get near to any Brighton players and that was slightly worrying.

There was something not quite right. The energy is not quite right. Thomas Tuchel is trying to shout tactics and I think they can hear it but can't do it right now for whatever reason and then he is frustrated, and then for about 25 minutes he just sat down. It is like he kind of gave up giving the information because he couldn't deliver to them.

We didn't see enough of Mason Mount, we hardly mentioned Romelu Lukaku, then Timo Werner came on - a player severely lacking in confidence. The whole front line of Chelsea is not there.

You can only put the backline under so much pressure and now they have lost that clean-sheet mentality. There are quite a lot of issues and contract situations that are affecting that dressing room.

I think Chelsea are looking behind them now and thinking 'can we keep in this top four?'

Manchester City are so far beyond them. Chelsea are not in the title race. They need to see a bit of application now to make sure they can get Champions League football.

They need to go away for a period of reflection and return to that clean-sheet mentality.