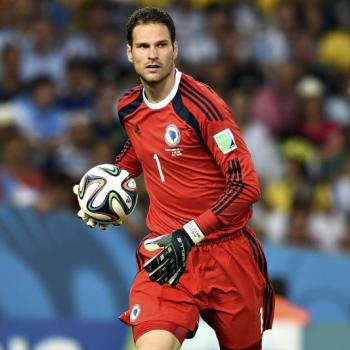 Chelsea's back-up goalkeeper Asmir Begovic has spoken out regarding his disappointment as being a number 2 behind Thibaut Courtois, but has insisted he wants to remain at the club.

The Bosnia-Herzegovina international has revealed that conversations prior to his move from Stoke last summer were promising, but he is unhappy as a back-up after losing his place in the side when Courtois returned from a knee injury at the start of December.

'(Moving to Chelsea) wasn’t as simple as being No.1 or No.2 — I felt I needed a new challenge,' Begovic told The Evening Standard.

'Certain things were put in place, conversations sounded good to me and I wanted to be part of a great club and help the team win trophies.'

'It hasn’t gone as planned, but hopefully that will change and the future will look a bit brighter.'