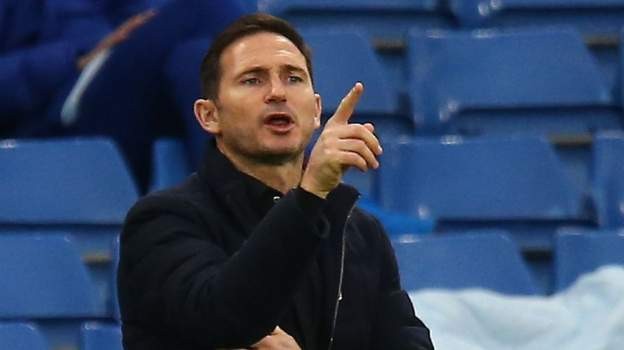 Goalkeeper Edouard Mendy is a doubt after missing Saturday's Premier League match against Southampton with a thigh injury sustained on Senegal duty.

Lampard said: "We played the best in Bayern. It shows you their quality and that we were a young team last year.

"Bayern was a great marker for the young players in the squad about the level that needs to be attained."

Chelsea drew 3-3 with Southampton, a match in which they led 2-0. They are seventh in the Premier League but have conceded nine goals in five games.

Lampard added: "I'm aware of the stats and the other stat is we've conceded second fewest shots.

"It helps to narrow down the issue. It's something we're aware of with recruitment and on the pitch with the players to make sure we set up well. We want to concede less, as do all teams at the moment."

This will be the first European encounter between Chelsea and Sevilla.

Chelsea have won one of their past nine Champions League matches against Spanish opponents (D5 L3) - a 2-1 win at Atletico Madrid in September 2017.Chelsea have lost their past two Champions League matches - they have never lost three consecutively in major Uefa European competition.Chelsea have lost their first match in a Champions League campaign twice in 16 previous seasons in the competition (W10 D4).Chelsea manager Frank Lampard will become only the second Englishman to manage in two Champions League campaigns, after Sir Bobby Robson (three - 1993-94, 1998-99 and 2002-03). The last Englishman to manage an English side in consecutive European Cup campaigns was Joe Fagan in 1983-84 and 1984-85 with Liverpool.

Sevilla have won each of their last three major European matches against English teams, beating Manchester United in March 2018 in the Champions League last 16, Wolves in August 2020 in the Europa League quarter-final and United again, also in August 2020 in the Europa League semi-final.Sevilla have won just one of their seven away major European matches in England (D3 L3), a 2-1 win at Old Trafford in March 2018. All seven of their away games have been against different teams - Bolton, Tottenham, Arsenal, Man City, Leicester, Liverpool and Man Utd.This is Sevilla's sixth appearance in the Champions League - they haven't lost on matchday one since 2007-08, when they were beaten 3-0 at the Emirates Stadium by Arsenal.

Sports data analysts Gracenote say Chelsea have 83% chance of progressing to the knockout stages of the Champions League.

Simon Gleave, head of sports analysis at Nielsen's Gracenote says: "The chance of Chelsea reaching the knockout stage was improved by the draw from 74% to 83% according to the Euro Club Index (www.euroclubindex.comexternal-link). This was due to a combination of avoiding higher ranked teams than Sevilla from the top seeds and the better pot 3 and 4 teams being drawn in other groups."