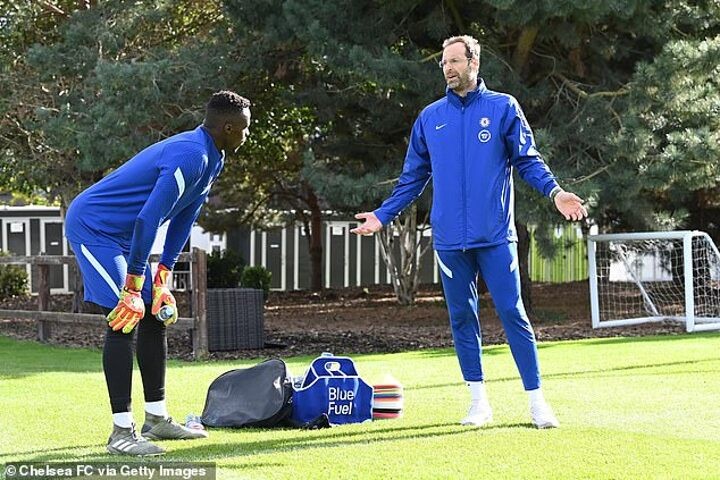 Edouard Mendy says he has been studying Petr Cech, following the 38-year-old’s remarkable return to training.

Cech retired in 2019 and works as a technical advisor at Stamford Bridge, but has been working with Frank Lampard’s side and was included in their 25-man Premier League squad as emergency cover.

It has given new No 1 Mendy who, like Cech, joined Chelsea from Rennes, a chance to see the standards expected at Stamford Bridge first-hand.

‘It’s just an absolute pleasure to work with him every day. Training allows me to watch how he works and to analyse his game,’ Mendy said. ‘It’s a wonderful bonus for me.’

Cech will not be in the squad to face Manchester United today, despite injury keeping out Kepa Arrizabalaga. Mendy, who is set to start, is confident Chelsea can cope without the veteran this season. ‘We already have three very good goalkeepers and that should be enough,’ he said.

The Senegal international has overtaken Kepa and Willy Caballero but insists there is no tension within the squad.

‘Before my first match, Kepa wished me good luck. He never holds back if he thinks he sees things that I might have missed, just as Willy Caballero does as well. It’s great that we have a united team,’ Mendy said.

‘There was a unique situation here with the goalkeepers but it wasn’t something that had any role in my decision to come to Chelsea.’

Lampard must find a way to stop Rashford on the pitch today, but hopes the 22-year-old England striker continues his campaigning off of it.

‘It’s been great to see young players with personality and a voice speaking up about things they care passionately about,’ said Lampard. ‘I absolutely commend him for that. There are a group of players now in the Premier League speaking out like he has. It has been a fantastic thing that is well appreciated.

‘He deserves credit for it, because even if you feel like you’re fighting for a good cause there will be many people quick to question it or be negative.’

Thiago Silva and Christian Pulisic are fit to travel to Manchester as Chelsea search for a balance between the creativity of their 3-3 draw against Southampton last Saturday, and the defensive solidity on show in a 0-0 against Sevilla on Tuesday.

‘A clean sheet always gives confidence,’ said Lampard. ‘But it’s very simplistic to say things were all wrong because we conceded goals in one game and all right because we didn’t in another.

‘We brought in six players looking to compete in the starting XI so I knew this would take some time.

‘It’s not perfect to have new players and no training time with them. But we’ll keep working.’