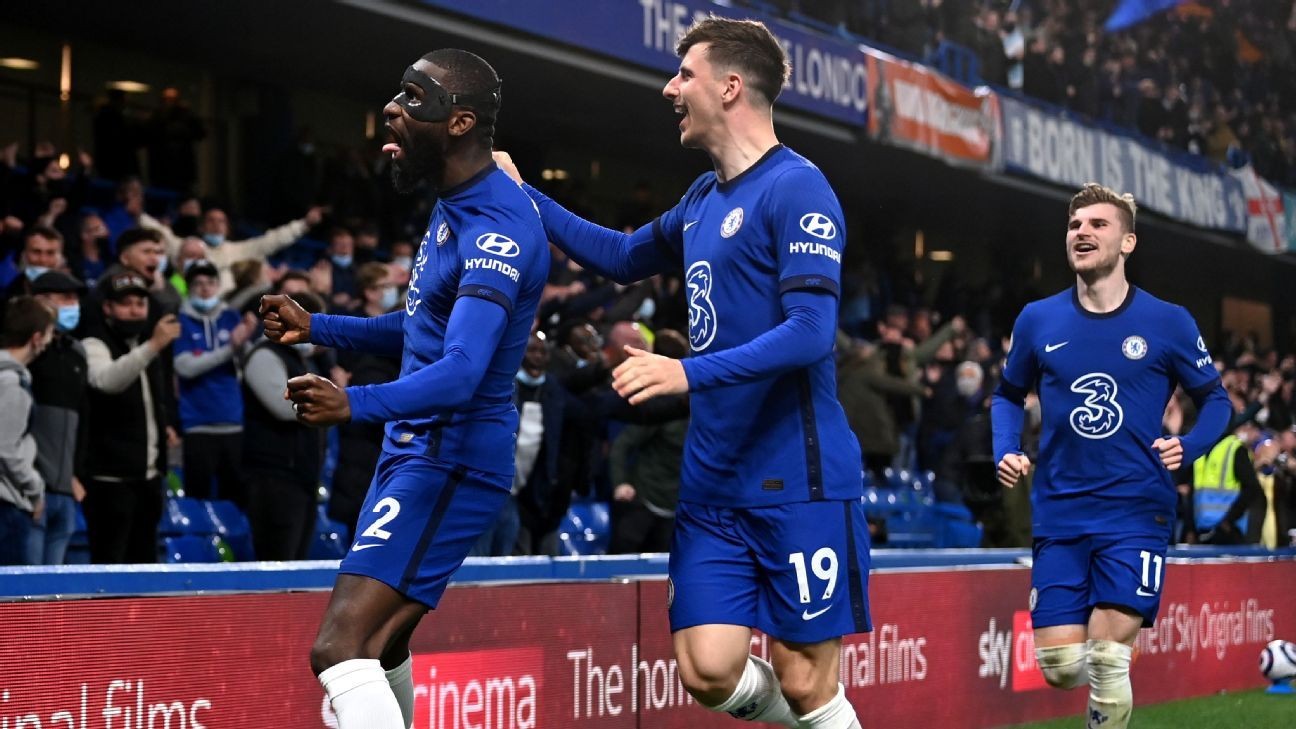 Chelsea seized control of their destiny in the Premier League top-four battle as they avenged their FA Cup final defeat by Leicester City to beat them 2-1 at Stamford Bridge on Tuesday.

Roared on by 8,000 fans Thomas Tuchel's side dominated and were rewarded after the break with Antonio Rudiger bundling in their opener before Jorginho rolled home a penalty.

Timo Werner twice had goals ruled out before the break while Leicester, who looked flat after Saturday's celebrations, offered little threat until Kelechi Iheanacho gave the visitors a lifeline with a cool finish in the 74th minute.

It was a nervy climax and Ayoze Perez wasted a glorious late chance to equalise but Chelsea clung on for a priceless win that moved them into third place on 67 points with one game remaining, meaning a win at Aston Villa on Sunday will guarantee them Champions League football next season.

Tempers flared in stoppage time with virtually every player on the pitch involved in a mass shoving contest near the touchline after Rudiger pushed Ricardo Pereira.

For Leicester there is now the looming possibility that they will let a Champions League berth slip through their fingers for the second season in succession.

They could have ensured a top-four finish had they won at Stamford Bridge but will now drop to fifth, on goal difference, if Liverpool win at Burnley on Wednesday.

Leicester, who have 66 points, finish with a home game against Tottenham Hotspur while Liverpool's final game of the season is at home to Crystal Palace.

Chelsea leapfrogged Leicester in the top-four race to qualify for the Champions League. Getty

"It was a strong performance and well deserved performance. No time for celebration, the job is not done yet, two more games to go. Very happy to play in front of supporters, it was a huge difference today," Tuchel said after the match. "On Sunday we had the post-match talk and you go on from there.

"Today is what we demand, played with high intensity and aggression and the team did very good."

Leicester manager Brendan Rodgers said it would be difficult for his side to miss out on Champions League if they falter with just one more league game to play.

"It would be really disappointing. But our story and your story is different," he said. "If we just fall short after 38 games as the team with the eighth biggest budget, it shows we fought really hard and just missed out. There are still points to play for and we'll be ready for that.

"It was a very hard fought game. We're obviously disappointed with the goals. We conceded a needless corner and didn't pick up well enough. The penalty is very, very, very, harsh. It's one that we will learn from."

On his disallowed goals, Werner said: "The first half was a bit like a mirror of the whole season for me. Always close, then at the end not really."

"It was really hard after the final, You want to win every final. The game was so big that we couldn't have so much things in our head because we had to concentrate on this game," said Werner.

Despite giving his side a chance with his late goal, Iheanacho said the loss stung in light of the implications of qualifying for the Champions League.

"It is so painful, we needed to win this game. The first half was not great and the second half we were much better. It was tough for us to come back, he said. "We gave everything tonight, it was so tough and hard for us and the last game we need to win and try to book our place in the Champions League."