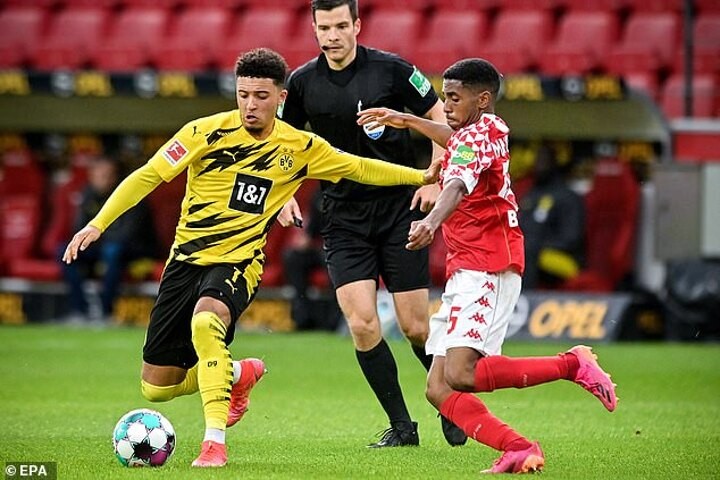 Chelsea are looking to grab pole position in the race for Jadon Sancho by getting ready to launch an £80million offer, according to reports.

Manchester United were extremely close to signing Sancho last summer but missed Borussia Dortmund's deadline to complete a move before they returned for pre-season training.

United are in for the England winger again this summer but they face competition from Chelsea, who are preparing a big-money offer for him - according to the Sun.

The report also claims that Chelsea boss Thomas Tuchel is a huge fan of the 21-year-old Englishman.

Sancho arrived at Dortmund in the summer of August 2017 from Manchester City, just months after Tuchel was sacked by the Bundesliga giants.

But Tuchel wants to focus on enjoying a successful end to the season first with Chelsea, with the club in the driving seat for a top-four finish while they also have a Champions League final against Manchester City to look forward to on May 29.

But when the season comes to an end, Chelsea chiefs are reportedly expected to make a big move for the Dortmund star - who is a boyhood Blues fan and is believed to want to return to England to be closer to family and friends.

But Dortmund will be looking to obtain a fee around the £100m mark for Sancho, who is hoping to make the final cut when Gareth Southgate names his England squad for the Euros.

After a move to United failed to come to fruition last summer, Sancho endured a slow start to the new campaign in Germany.

But Sancho has since rediscovered his form which had previously got everyone talking.

Sancho has gone onto score 16 goals and created 21 assists in 37 matches in all competitions this season for Dortmund.

And his heroics, alongside Erling Haaland, saw Dortmund lift the German Cup last week - with the pair both scoring braces in a 4-1 victory over RB Leipzig in the final.

'We already had a gentleman's agreement with Jadon last year that he can switch under certain conditions,' Zorc told ARD.