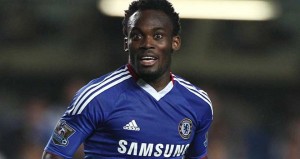 UAE giants Al Ain haveÂ launched an ambitious bid to sign the Ghana superstar Michael Essien from English side Chelsea and unite him with his compatriotÂ Asamoah Gyan at the Emirate club with a deal expected this week, GHANAsoccernet.com can reveal.

Sources close to the midfielder have told Ghana's leading football news outfit Ghanasoccernet.com that Â Al Ain directors have made initial inquiries about signing the want-away player from the Blues.

In fact Asamoah Gyan, who is a close friend of Essien, mooted the idea to Al Ain officials who are seeking replacement for out-of-formÂ midfielder Mirel Radoi which has prompted the chase by the UAE club.

Al Ain, the mega-rich UAE club who also fund English side Manchester City, will come up with the money needed to sign the players from Chelsea even though the price involved is unknown but they are keen to seal the deal this week.

They are also willing to stump up $200,000 weekly wage, which is tax free, to ensure that his financial demands are met, GHANAsoccernet.com understands.

If the move for a permanent deal falls through, Al Ain could argue for a loan deal similar to what they did with Gyan when he moved from Sunderland.

An Al Ain spokesman refused to comment to the National on the possibility of Essien joining the UAE champions, but also did not deny the teamâ€™s pursuit.

Even though a club spokesman refused to confirm the report on Sunday insiders say the transfer could be sealed within hours if Essien agrees to the deal as he has not ruled out playing in the Middle East.

Al Ain are seeking a replacement for midfielder Mirel Radoi, who has been struggling with his form and injuries this season, and has made only seven Arabian Gulf League appearances.

The Romanian injured his leg during the match against Ahli and has been training and playing through the pain, but doctors have advised surgery.

With Essien, who played for Chelsea in their FA Cup third round tie at Derby County on Sunday, looking for a club where he can be assured a starting place ahead of the World Cup in Brazil, Al Ain will be hoping Gyan can convince his Ghana teammate because the player is keen on a move to another top club in Europe.

Do you think Essien should leave the English Premier League and join Asamoah Gyan in the UAE? Make your views known in the box below: