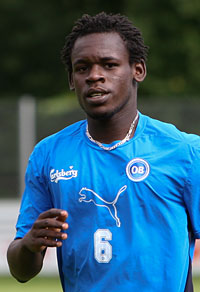 Berekum Chelsea striker Emmanuel Clottey insists he is not bothered by his failure to get off the mark in the league after three matches.

A lot of doubts have been raised over theÂ competence of the 24-year-old who led Chelsea's attack in Sunday's draw with Hearts but the ex Great Olympics striker says he is least bothered by his poor early season goal scoring rate.

â€œPersonally I am not happy but at the same time not shy about my goal scoring record this season,â€ the 2001 Goal King told GHANAsoccernet.com.

â€œYes I have not scored in three games but every striker goes through such a phase so itâ€™s not a problem at all for me.

â€œDefenders are getting more and more mindful of dangerous strikers and therefore credit must also be given to them.â€

Clottey however believes it is just a matter of time for his to find his scoring boots especially since playing around a set of new players.

â€œWe have some new players in the team and we keep learning to play with each other so I am sure very soon we have been acquainted with each otherâ€™s play the goals will come,â€ he added.