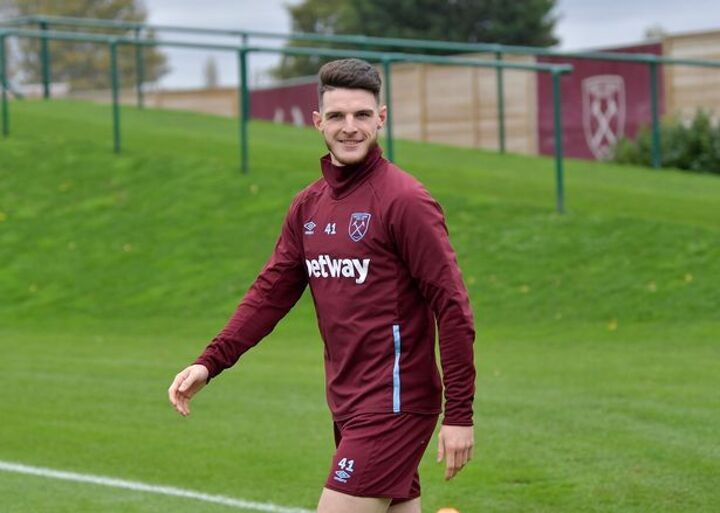 The Chelsea train keeps on rolling.

The Blues are unbeaten in 13 games in all competitions and they are now through to the next stage of the Champions League.

Chelsea will now prepare for a meeting with Tottenham Hotspur and Jose Mourinho on their quest for a Premier League title.

The game will also bring the transfer window one week closer and for Lampard that could be a game-changing month. The Blues boss was busy during the previous window and orchestrated a mini-overhaul at Stamford Bridge.

Now he could make a few select moves to further boost his squad and help them over the line and into a title race.

With that in mind here is the latest Chelsea transfer round-up.

Rice opens up on future ambitions amid Chelsea transfer links

Declan Rice has revealed his desire to win trophies as links to Chelsea persist.

The midfielder started his career on the books of Chelsea before being released and joining West Ham United.

He is now being linked with a big-money return and Rice has revealed he is keen to win trophies in the future.

"As a footballer you only get one career and it goes by very quick," Rice told Sky Sports.

"You want to be successful for club and country. I think it’s an important thing to win trophies. There’s talk of Harry Kane at Spurs and what he should be doing, obviously he can do whatever he wants.

"He’s going to win trophies we all know that. I think that’s something I want to aim for as well. I’m only 21 but to get those highs of your career you need to win stuff and that’s what I want to do."

Chelsea are intending to sign a talented young defender, according to reports.

The defence has been an area of concern for Frank Lampard as he looks to mount a title challenge.

And now transfer expert Fabrizio Romano has told the Here We Go Podcast that the club are targeting a younger defender but one with experience.

Thiago Silva is in discussions with Chelsea about signing a new deal only months after arriving at the club, according to reports.

The veteran defender has been a big bonus for Frank Lampard after signing on a free transfer from Paris Saint-Germain.

It is now being claimed the two parties have engaged in discussions to extend Silva’s stay at Stamford Bridge.

TMW, is reporting that that the early stages of talks have been initiated between the player’s representatives and Chelsea with Silva open to the idea of staying longer.