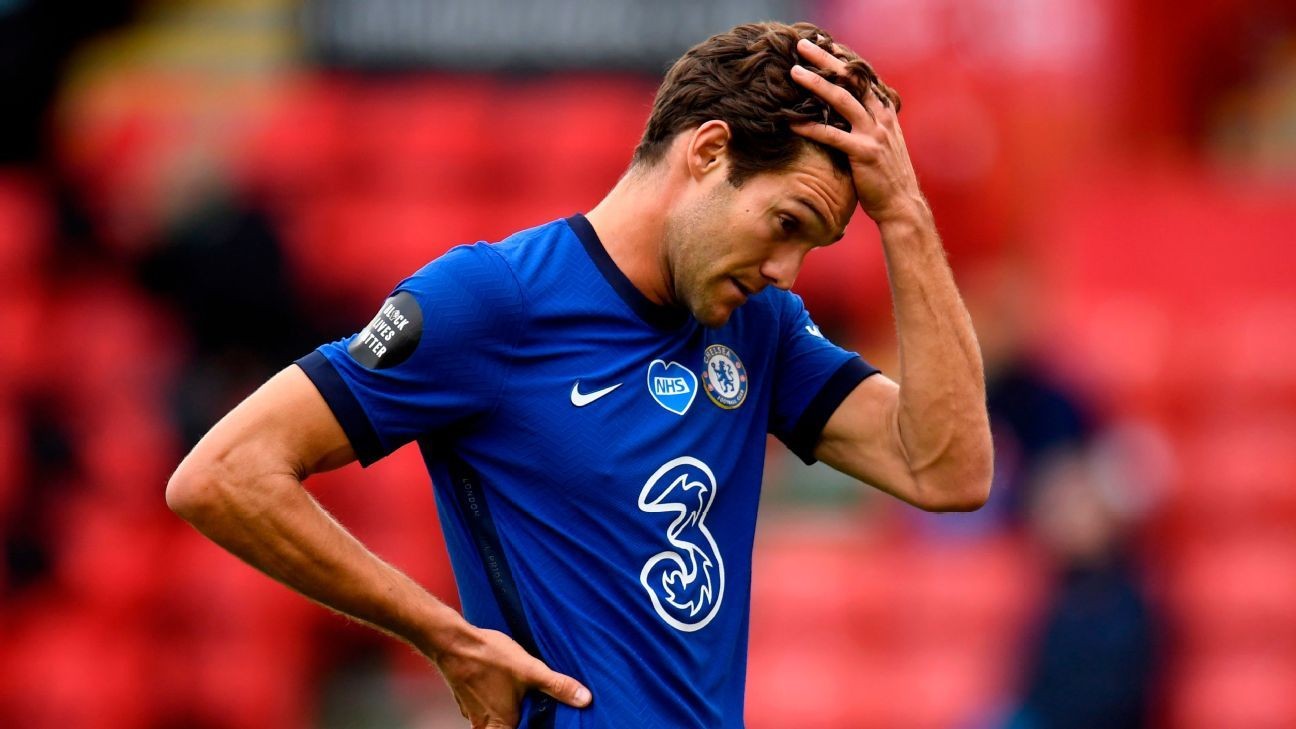 SHEFFIELD, England -- As Chelsea continue their attempts to add Bayer Leverkusen winger Kai Havertz to their increasing array of attacking talent at Stamford Bridge, Saturday's 3-0 defeat against Sheffield United at Bramall Lane led to the inescapable sense that they're decorating the outside of the house while water continues to pour through the roof.

With Ajax winger Hakim Ziyech and RB Leipzig forward Timo Werner already added to a squad boasting the likes of Christian Pulisic, Tammy Abraham and Olivier Giroud up front, the capture of Havertz, if Chelsea can pull it off, would give manager Frank Lampard incredible options going forward next season. But the manner of the loss in Sheffield should set alarm bells ringing within Chelsea's scouting department because the real priority for strengthening at the end of this season should be their defence.

Had Chelsea won this game, combined with a failure by Wolves to defeat Everton on Sunday, then Champions League qualification would have been secured in the event of Manchester City's two-year UEFA ban being upheld by the Court of Arbitration for Sport (CAS) on Monday. In the end, a catalogue of defensive calamities against Chris Wilder's team, who are now firmly back in the hunt for a Champions League spot after this win -- they're five points out of fourth place with three games left, has left Chelsea anxiously awaiting the verdict from CAS.

If City win their appeal and are therefore able to compete in next season's Champions League, this defeat could be the one that costs Chelsea a place in the top four and, as a consequence, deny them a place in Europe's premier club competition. If that proves to be the case, Lampard's failure to address the recurring problems at the back will deserve greater scrutiny than it has received so far.

"We know goals often start with errors," Lampard said. "At 2-0 down, you make it difficult for yourselves. Disappointing. Mistakes. You analyse all season and review and move forward. We need to put that to bed quickly and fight for the top four. I learned a lot and I won't forget that."

The story of Chelsea, post-restart, has been defined by the attacking contributions of Pulisic, Willian and Giroud. There have been issues at the back, but Chelsea have largely been able to score enough goals to make up for the errors and secure the points. The 3-2 defeat at West Ham earlier this month was a night when Chelsea's luck ran out, with Andriy Yarmolenko scoring a last minute winner for the Hammers after Lampard's defence had gone AWOL. But if the performance at West Ham was bad, it was much worse at Bramall Lane, to the extent that you have to wonder why Chelsea are focusing so much of their summer spending on forwards.

Don't forget also that Chelsea offloaded centre-halves Gary Cahill and David Luiz last summer, to Crystal Palace and Arsenal respectively, without being able to replace them due to the club's worldwide transfer ban. Fikayo Tomori and Kurt Zouma were recalled from loan moves to compete with Andreas Christensen and Antonio Rudiger for the two centre-back spots, but while Tomori and Rudiger have impressed at times, Chelsea clearly still need a commanding centre-half.

Marcos Alonso and Chelsea simply weren't good enough behind the ball and will continue to lose ground at the top until they resolve their defensive issues. PETER POWELL/POOL/AFP via Getty Images

The deficiencies were evident against Sheffield United, who dominated the Chelsea defence with the physical and committed Oli McBurnie and David McGoldrick winning virtually every ball, in the air and on the ground, against Christensen and Zouma. McBurnie was afforded far too much space on 18 minutes to volley a shot towards goal, which was palmed out by goalkeeper Kepa Arrizabalaga before McGoldrick netted the rebound as Blues defenders simply stood and watched. The goal was McGoldrick's first ever in the Premier League and while Kepa has made plenty of mistakes this season, he was let down by his defenders on this occasion.

United scored again on 33 minutes when McBurnie was left unmarked to direct an Enda Stevens cross past Kepa with a powerful near-post header. McBurnie is an ungainly figure, all arms, legs and energy, but Chelsea seemed to underestimate his ability to hurt them in the final third and they paid a heavy price. If they had a commanding centre-half in the team, Chelsea would have been able to deal with McBurnie and nullify his threat, but Lampard simply does not have the options.

It was a similar story of defensive chaos that enabled McGoldrick to score his second, and United's third, on 77 minutes with a strike from close range. It was the 11th goal Chelsea have conceded in six league games since the restart, and United missed two clear chances to punish them further in the final stages.

"They were better than us, physically, in the mind and with the ball," Lampard said. "So you lose the game. They were stronger than us.

"You feel and hear every noise and all I could hear was Sheffield United voices. They are a good team. If you come here and perform below par, this is what will happen."

Who knows how costly Chelsea's defensive problems will prove to be? If they do miss out on the Champions League, the cost will run to millions and it could deny them the chance to strengthen at the back.

Havertz will undoubtedly be a fantastic signing if Chelsea can win the race for his signature, but they may be better spending the money instead on a centre-back and goalkeeper. Goals may win games, but clean sheets win trophies and Chelsea rarely look like posting one of those.