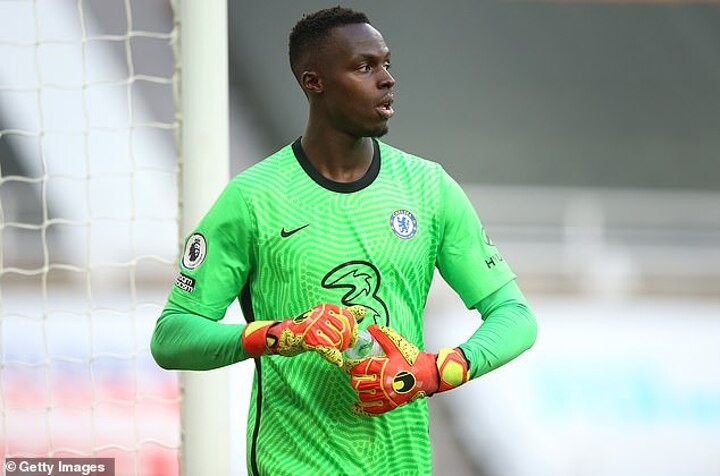 Edouard Mendy's positive start at Chelsea can be explained by their collective defensive improvement, according to former Blues keeper Rob Green.

Mendy, who signed from Rennes for £22million back in September, has kept seven clean sheets in his nine appearances for the club to date.

He has earned praise from manager Frank Lampard, but Green believes the players in front of him deserve their share of the credit as well.

'In five games he's made seven saves, so that highlights how well Chelsea have marshalled it,' Green told Sky Sports.

'When you are looking at it, Thiago Silva and Reece James obviously has played a lot and there is [Cesar] Azpilicueta and Kurt Zouma.

'They have continuity in their defenders and when you have that continuity coming into a club, the ability to communicate is key.

'Thiago Silva has been in there with his positioning sense, his ability to pull people around and get them into the positions that he wants to.

'In the West Brom game where he had his slip and the team looked open and exposed is one they have really managed to bring together.

'The trust is there. The defence puts trust on the attack at Chelsea, that the guys up front will score goals.

'They can take a bit more of a conservative view with it. You look at Ben Chilwell, he is up there every week getting goals, assists and causing havoc in the opposing area.

'With the goalkeeper [Mendy], I think he has looked assured. Playing out from the back is something that can be worked on, but they have managed to change the style of play slightly and it has really suited them.

'They have got big tests in the future but so far they are flying.'

Mendy kept a clean sheet in Chelsea's 3-0 Champions League win over his former club Rennes at the start of the month and could line up against them in the return fixture in France on Tuesday night.

He will come into the fixture brimming with confidence having conceded just once in seven games.

And Mendy was praised by Lampard ahead of Tuesday's game.

'I've been really pleased. It's not easy and he's made it look easy, which is the difficult thing,' he told Chelsea TV.

'When you come from another league there are of course differences in the Premier League - the physical nature, the speed of the league - and I think it is unique in those terms.

'For a goalkeeper that has got such a spotlight on him and is having to face these differences and make relationships with the team around him, he has done it very seamlessly.

'He has settled off the pitch and is performing on the pitch, you can't ask any more than that, and he is doing it with a smile on his face and a really great attitude.

'So I'm really pleased. It's a good start for him in a Chelsea shirt. Long may it continue.'