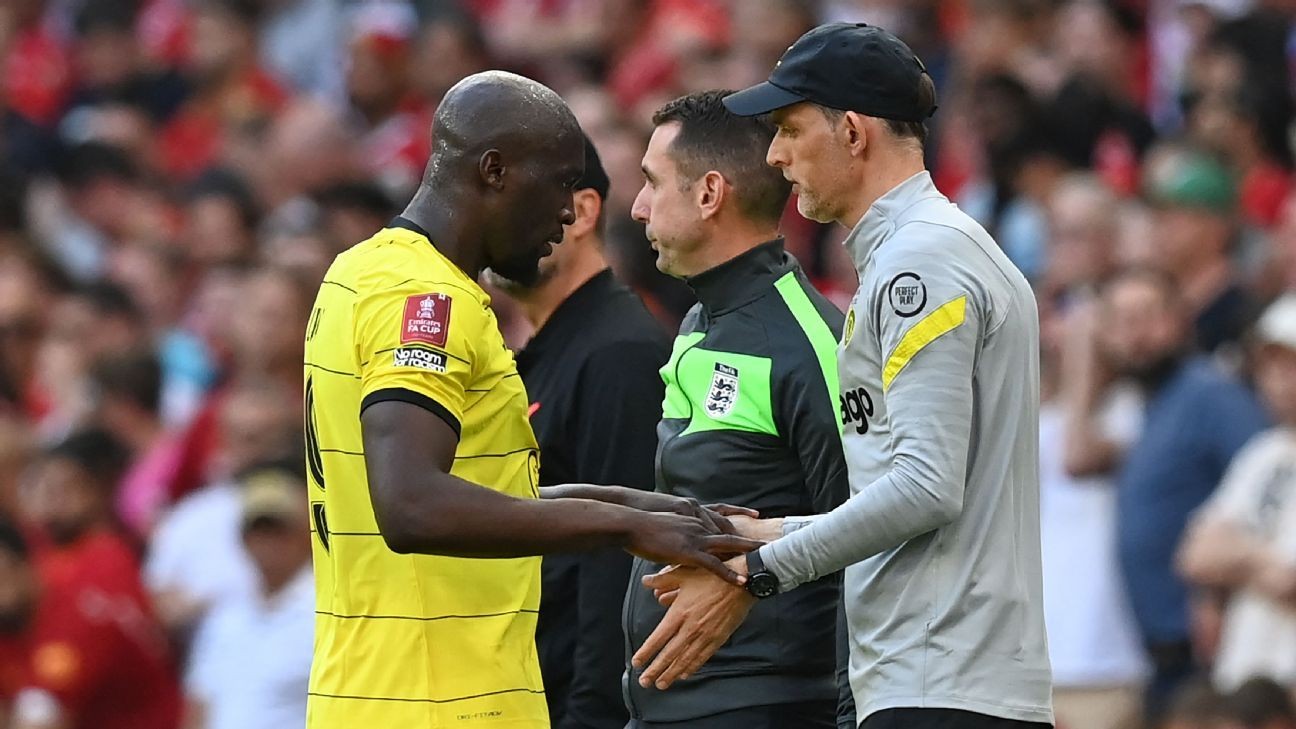 LONDON -- Nothing quite screams "Chelsea need a striker" as the sight of Ross Barkley playing at centre-forward in an FA Cup final.

It was a circuitous route to this most bizarre of situations, relying on a peripheral midfielder without any first-team minutes since Jan. 8 to help close out an occasion such as Saturday's loss on penalties to Liverpool -- but nevertheless provided evidence of the principal reason why a gap remains between the Blues and the top two sides in England.

Preferred option Kai Havertz failed a late fitness test on a hamstring problem, Romelu Lukaku was substituted after 85 minutes, Christian Pulisic failed to impress when moved into the middle, Timo Werner sustained a hamstring problem in the warm-up and Ruben Loftus-Cheek lasted just 13 minutes before Barkley's superior penalty-taking record triggered his sudden inclusion for the final couple of minutes of extra time.

Barkley converted his spot-kick and so in that context, Chelsea boss Thomas Tuchel will feel that particular decision was justified. Yet bringing on Loftus-Cheek in the first place so late in the game -- at the start of the second period of extra-time -- was by itself somewhat baffling given the proximity to penalties.

If Werner was still fit enough for the bench, could he not have played 15 minutes? And the curious picture of Barkley playing out time as a makeshift No. 9 is symbolic of a wider issue. With or without Lukaku, Chelsea simply have not been as cohesive in attack as Manchester City and Liverpool over the course of the campaign.

As was the case when these sides also met in February's Carabao Cup final and in April's Champions League quarterfinal exit to Real Madrid, the Blues had sufficient chances at Wembley on Saturday to win but failed to take them. For all his troubles since returning to Chelsea in a €115 million move from Internazionale last summer, Lukaku is the club's top-scorer this season with 15 goals. Only three other players have got into double figures across all competitions. Liverpool, by contrast, have three players -- Mohamed Salah, Sadio Mane and Diogo Jota -- who have scored 15 goals each in the Premier League alone.

Chelsea's third straight FA Cup final loss was partly due a dearth of production from the striker position, an issue that Romelu Lukaku was supposed to fix. GLYN KIRK/AFP via Getty Images

With two games to play, Chelsea have scored 73 goals in the league, a respectable tally but still well short of Liverpool (89) and City, who have scored 94 goals despite failing to sign the centre-forward they desired last summer. Pep Guardiola found a way to maintain City's effectiveness regardless in a manner Tuchel hasn't quite matched. It is a situation which must be top of the in-tray once the new club owners are in place: either transfer Lukaku or build around him more effectively to close the gap on Liverpool and City.

The issue of Lukaku's future resurfaced once again on the eve of Saturday's game, creating headlines the Belgian himself sought to diffuse after his agent had been quoted discussing a return to Italy -- but by that stage on Friday, Tuchel had already admitted it was "a situation you don't want to have before big matches."

Lukaku's unhappiness has bubbled along in the background ever since he gave that controversial interview to Sky Italia back in December but wider events have since overtaken Chelsea, most obviously the sale triggered by the UK government sanctioning owner Roman Abramovich for alleged ties to Russia president Vladimir Putin.

Havertz has proved a more effective option, but arguably more so without the ball as he leads the Chelsea press so well; his absence was keenly felt early on at Wembley on Saturday as Liverpool threatened to overwhelm the Blues in a devastating opening 20-minute spell in which Luis Diaz ran riot without scoring. Pulisic had multiple chances as Chelsea settled -- the clearest two minutes after the restart when firing straight at Alisson from inside the box -- but this was a wasteful performance from the United States international, another example of the profligacy that permeates the squad.

Lukaku was withdrawn having touched the ball just 15 times, the fewest of any starter on the pitch aside from Salah (13), who only played 33 minutes before picking up a groin injury. Losing Werner shortly before-kick-off was unfortunate but the Germany international has never been the most reliable performer in any case, certainly another to lack the clinical touch Chelsea so badly need in front of goal.

Tuchel mentioned the government sanctions' impact have had in his planning for next season and the debilitating effect on the end to this campaign, citing players including Andreas Christensen and Antonio Rudiger leaving as the opposite to the unity Liverpool currently possess. Yet they were still able to rally to match Liverpool stride for stride, only falling short in front of goal once more; it felt significant in the wider context that not one of Chelsea's seven penalties was taken by a recognised forward while Liverpool had Jota, Roberto Firmino and Mane among their takers.

Instead of one last piece of silverware to end the Abramovich era, Chelsea claim an unwanted piece of history as the first team ever to lose three consecutive FA Cup finals. After the 2020 loss to Arsenal, they were beaten 1-0 by Leicester City last season due to another barren outing in front of goal, a issue repeated with such regularity that it prompted them to pay a club-record fee to sign Lukaku. The problem still remains.