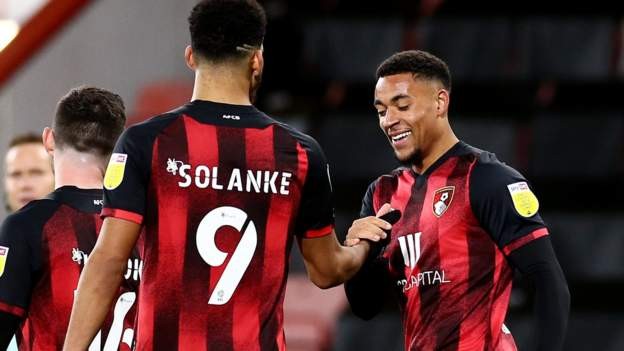 Bournemouth moved up to second in the Championship after Arnaut Danjuma gave the Cherries a narrow win over Bristol City at the Vitality Stadium.

Robins striker Famara Diedhiou had an effort deflected onto the outside of the post just before the break as the visitors enjoyed the better chances in the first half.

But the hosts were more enterprising after the interval, as Dominic Solanke clipped an upright and Junior Stanislas fired narrowly wide.

And substitute Danjuma won it in the 81st minute, collecting Solanke's through ball and showing composure to lift the ball over City keeper Daniel Bentley and extend his side's unbeaten start to the campaign.

Jason Tindall's men are six points behind leaders Reading, having won four and drawn four following their relegation from the Premier League in July.

The result was ultimately deserved after Bournemouth took control of the game in the second half, as Bristol City rarely troubled Asmir Begovic.

The Robins had started brightly, with Antoine Semenyo sending a shot into the side-netting from a narrow angle in the third minute, and created several other openings.

Begovic made a vital save midway through the first period, tipping a low drive from Tyreeq Bakinson behind, and Diedhiou nodded the resulting corner over the bar.

However, the visitors were unable to muster a response to Danjuma's late strike and Dean Holden's side, who were without injured pair Alfie Mawson and Andreas Weimann, have slipped to sixth following a fourth game without a win.

"I felt first half we didn't play with enough calmness or purpose, and we spoke about that at half-time.

"We wanted to play with more intensity and attack a lot more, and I think we did that.

"When Arnaut got his moment, he took it with a great finish.

"We want to be pushing for top spot and we knew we had to win on the back of three draws, and thankfully we managed to do that."

"We absolutely dominated the first half. We had gilt-edged chances, and didn't take them.

"We passed the ball so well they couldn't get near us at times.

"We knew there would be a reaction from them. We switched off once with 10 minutes to go and we got punished for it.

"It is a performance which deserved at least a point, but we can't feel sorry for ourselves and have to move on quickly."

Attempt saved. Adam Smith (Bournemouth) right footed shot from outside the box is saved in the centre of the goal. Assisted by Dominic Solanke.

Adam Smith (Bournemouth) wins a free kick in the defensive half.

Attempt missed. Jamie Paterson (Bristol City) right footed shot from the centre of the box misses to the right. Assisted by Nahki Wells.

Chris Mepham (Bournemouth) wins a free kick in the defensive half.