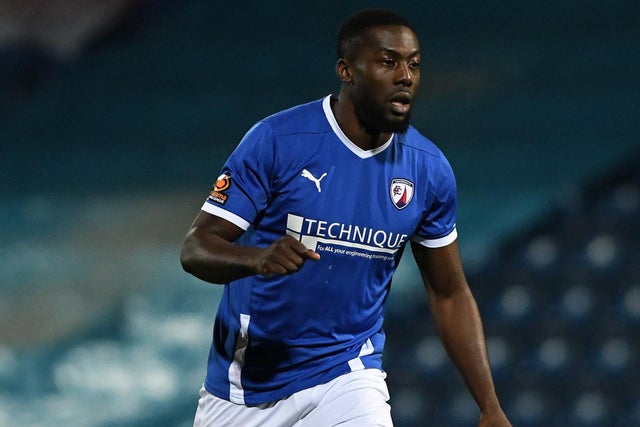 But that is exactly where Akwasi Asante’s career has taken him so far.

Like most football-mad youngsters in Amsterdam, Asante’s dream was to play for Ajax, but he also admired Arsenal’s great ‘invincibles’ side and had a soft spot for Manchester United, in particular Dutch striker Ruud Van Nistlerooy.

Asante is of course now playing in the blue of Chesterfield, but it was the Blues in Birmingham where his career in England started, moving to the country when he was 13.

He joined City’s academy in July 2009, and he signed his first professional contract 18 months later.

The forward made his professional debut in the Europa League qualifying stage against Portugese side CD Nacional in 2011, coming off the bench for the final few minutes for Birmingham in a 3-0 win. It was his best moment in football so far, along with winning promotion with Solihull Moors from the National League North in 2016. His biggest down was being relegated to the third tier of non-league with Tamworth.

On making his debut in the Europa League, he told the DT: “To be honest I can’t remember because I was that nervous! I came on for about 10 minutes and it went by like a flash. It was overwhelming but looking back now it was a special moment in front of a full house.”

Injuries hampered his time at St Andrews and after loan spells at Northampton Town and Shrewsbury Town he left the club in 2014 which is where his non-league career began and where he has remained for the most part.

Football is a funny old game and years later after leaving Birmingham, Asante linked up with his former youth coach at City, James Rowe, at Gloucester and now at the Spireites on an 18-month deal.

So what is it about boss Rowe that made Asante want to work with him again?

Life at Town is pretty sweet right now after a six-match unbeaten run, including five wins, and five clean sheets on the bounce, which equates to more than eight hours without conceding. Pressing defenders and not giving them a minute’s peace has become ‘second nature’ to Town’s front players now, Asante said, and they are enjoying it too.

“We have got off to a flyer,” Asante said. “Everyone is enjoying the way that we play at the minute - free-flowing football, scoring lots of goals and we are not conceding so you can’t ask for much more than that.

“Everyone is buying into the gaffer, what he is about, his philosophy, and it is clearly working. Everyone believes in what we are doing and the system and everyone is hungry so as long as we keep doing what we are doing we don’t fear anyone. We believe that every game we go into we can get a win.”

Asante was Rowe’s first signing as Chesterfield manager, and the striker repaid him with a goal on his debut against Weymouth and a hat-trick in a 6-0 hammering of Barnet. His third goal in the rout of the Bees, saw him chase down a lost cause, keep the ball from going out of play twice, before smashing the ball low and hard at the near post.

“It is always special to take the matchball, especially so soon into my Chesterfield career,” Asante said. “It was very special and one I will definitely remember. At the time, it is adrenaline so you don’t really see what you have done until you watch it back, I didn’t realise I had run off the pitch until I watched it back. I saw Tom Denton in the box and I actually thought about crossing it to him but one of the defenders blocked off the near post so I thought just cut inside and shoot, and fortunately for me it went in.”

A 10-day isolation period following positive Covid tests in the camp halted their progress over the festive period but they were kept on their toes by Curtis Weston, who led fitness classes on Zoom. Leg work, core and upper body were on the menu. Expect Mr Weston’s workout DVD to hit the shops next Christmas.

And it must have worked as they carried on where they left off with a 1-0 win against one of Asante’s former clubs in Solihull Moors on Saturday.

Asante gave special praise to the likes of Weston, Jak McCourt and Tom Whelan, who he says have been ‘unbelievable.’

And the role his strike partner Tom Denton plays is one Asante knows very well, and appreciates.

He added: “It is nice to play with a target man because at the last two or three clubs I have been the target man! I understand it, it is hard work, you have got to win your headers, you have got to hold it up, and if you don’t it is coming back on the team. I think people underestimate how hard it is. People think just because he is tall he should be winning every header but usually he has got two players on him and they are all pushing and shoving. Credit to him because he is a very good player and I really enjoy playing with him.”

Like Rowe, it is hard to get anything out of Asante about what Chesterfield can achieve this season. Quietly confident probably best sums it up. We’ll take that.