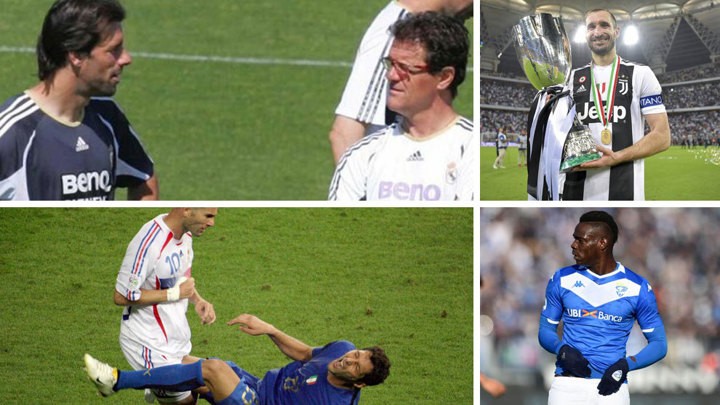 Although press conferences have been brought to a halt due to the coronavirus outbreak, several players and coaches have found novel ways to reveal several anecdotes from the past.

Through Instagram live sessions, autobiographies or group calls, former players and coaches have recalled untold stories from their past.

Here, we look at some of the most explosive revelations.

"The greatest talent I ever coached was Ronaldo," he said.

"But, at the same time, he was the player who created the most problems for me in the dressing room.

"He used to throw parties and do everything.

"One time [Ruud] Van Nistelrooy said to me 'coach, the dressing room smells like alcohol'.

"Then Ronaldo went to Milan and we started to win, but if we're talking about talent then he was the greatest, without a doubt."

The Dutchman denied these remarks and stressed that the players' attitude was professional.

"Balotelli is a negative person with no respect for the team," he told La Repubblica.

"In 2013, in the Confederations Cup against Brazil, he didn't help us at all.

"He deserved a slap.

"Felipe Melo is even worse, the worst of the worst.

"I can't stand disrespectful people, those who always want to go against the grain.

"There was always a fight with him.

"At least I have the sincerity and courage to say things to your face," he posted.

"Who knows what you'll say one day about your current teammates.

"A strange captain... if this is what being a champion is then I'd prefer not to be one.

For his part, Melo stressed that he never disrespected anyone at Juventus.

"It would be interesting to know what incident he's referring to," the former Juventus and Inter midfielder commented.

"I never disrespected anyone in Turin, but he says that Balotelli deserved a slap and that I was the worst of the worst and that there was always a threat of a fight because of me.

"I'm sorry, but it's easy to speak badly of others in a book.

"Perhaps he's still angry because when I went to Galatasaray we knocked them out of the Champions League and we beat Italy with Brazil.

"He's won nothing at international level and saying things like this shows him to be unprofessional.

"It shows a lack of respect and I won't say any more.

"Some things have to stay in the dressing room."

Former Arsenal striker Emmanuel Adebayor hit back at those who lamented him for not joining the fight against the coronavirus.

"Afterwards, there will be people who will criticise me for the fact that I didn't make a donation in Lome.

"Some think that I was the one who introduced the virus in Lome.

"It is very unfortunate, but this country is like that.

"I am Emmanuel Sheyi Adebayor and I will always do what I want."

Arturo Vidal agreed with some remarks from former Chile U20 coach Jose Sulantay, who criticised Marcelo Bielsa's work as the national team coach.

"Bielsa's feet have been kissed in Chile, but he has never won anything abroad," Sulantay told Gritalo America.

"He hasn't done enough to say that he changed the country's whole history."

"Someone who says things straight," he posted.

Jose Mourinho and Marco Materazzi were the two Inter members who managed to convince Samuel Eto'o to move from Barcelona to the Serie A side.

"Mourinho convinced me in a simple way," Eto'o revealed in an interview for La Gazzetta Dello Sport.

"He sent me a photo of Inter's No. 9 shirt and wrote to me saying 'It's yours, it's waiting for you'.

"[Marco] Materazzi then messaged me saying 'If you come to Inter, we'll win everything'.

"I didn't have his number in my phone so I asked [Demetrio] Albertini 'Is it yours?'

"Such a thing had never happened to me in my whole career and that message carried great weight in my decision."

The year Cassano lost 16kg in a preseason

Antonio Cassano recalled his spell at Real Madrid in an interview, revealing that he managed to lose 16kg during the preseason preparations one summer.

"In the athletic preparation, I lost 16 kilograms and scored two goals in the first three games, but then I fell out of the team," he told Sky Sport Italia.

"I lost my head, and when you disrespect Capello he cuts you off.

"Then he gave me another chance.

"He did a lot for me and I did very little for him."

Materazzi and his incident with Zidane

The former Inter centre-back recalled his insult towards Zinedine Zidane that led to the latter headbutting the Italian and getting sent off in the 2006 World Cup final.

"I didn't want to take yet another scolding from [Gennaro] Gattuso, so I held his shirt," Materazzi said during an Instagram Live video.

"He responded and that's what happened, luckily.

"I didn't expect it, otherwise I would have had an early shower too.