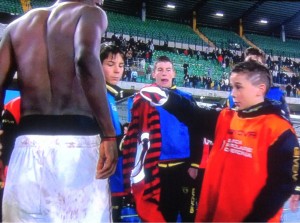 Chievo has revealed that the ball boy who initially refused Sulley Muntari's shirt after Tuesday's Serie A loss to AC MilanÂ was only following club policy.

The Ghana international scored the only goal of the game in Verona and, as he left the field after the final whistle, he removed his jersey and presented it to one of the home side's ball boys.

The child in question tried to immediately hand it back to Muntari only to be persuaded to hold onto it by one of his fellow ball boys.

The incident was picked up by TV cameras and generated some debate in the morning papers, prompting Chievo to clarify the situation.

"The behavior of the ball boy in question is only a result of directives that the club provided to young players at the start of the season, that is not to ask for Chievo jerseys or jerseys from the opposition so as not to disturb players still grappling with post-game emotions," a statement on the club's official website read.

"The strange thing is that the child, a young player of Chievo's footballing school, is actually a fan of AC Milan. Of course he accepted Muntari's shirt immediately and willingly showed it proudly to friends as a real trophy, but he then stuck to the directives of his club by refusing the gift.

"Then, getting past the embarrassment of the situation, the shirt was returned to the hands of the lucky little player!"

Muntari's goal secured a victory for Milan which propelled the club back to the top of Serie A ahead of Juventus' meeting with Lazio in Turin on Wednesday.