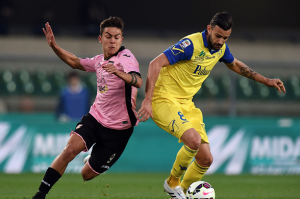 Chievo are ready to welcome Palermo in a Serie A fixture on Sunday afternoon at the Stadio Bentegodi, in a clash between two sides that have achieved contrasting results this season.

The Mussi Volanti have been surprising throughout the season, securing so far a spot in the top half of the table. Rolando Maran’s squad have managed to end a losing streak that was threatening to ruin their campaign between the end of January and the beginning of February, and are now in good form after defeating Sampdoria in Genoa.

On the contrary, the Rosanero are having a difficult season and are currently fighting for avoiding the relegation. The squad, currently managed by Walter Novellino after an impressive series of changes in the coach position, is currently on a winless streak that lasts since their late-January win over Udinese.

The last clash between the two sides, however, resulted in a Palermo win. In that occasion, Serie A veteran Alberto Gilardino scored the only goal of the game securing the three points for the home side.

On Sunday, nonetheless, the former Fiorentina, Genoa, Parma and Milan forward will be sitting on the bench as Novellino is willing to try a light offensive line with Franco Vazquez playing as centre-forward and a strongly attacking midfield composed by Robin Quaison, Oscar Hiljemark, Gaston Brugman and Aleksandar Trajkovski. The Rosaneri will also lack young defender Edoardo Goldaniga, sidelined due to injury.

On the other side, coach Maran will be missing important elements such as midfielder Mariano Izco, defender Alessandro Gamberini and forward Roberto Inglese. As a result, Chievo’s attack will rely on the veteran couple formed by Riccardo Meggiorini and Sergio Pellissier. The two strikers have been in a poor form this season, scoring respectively five and two goals.