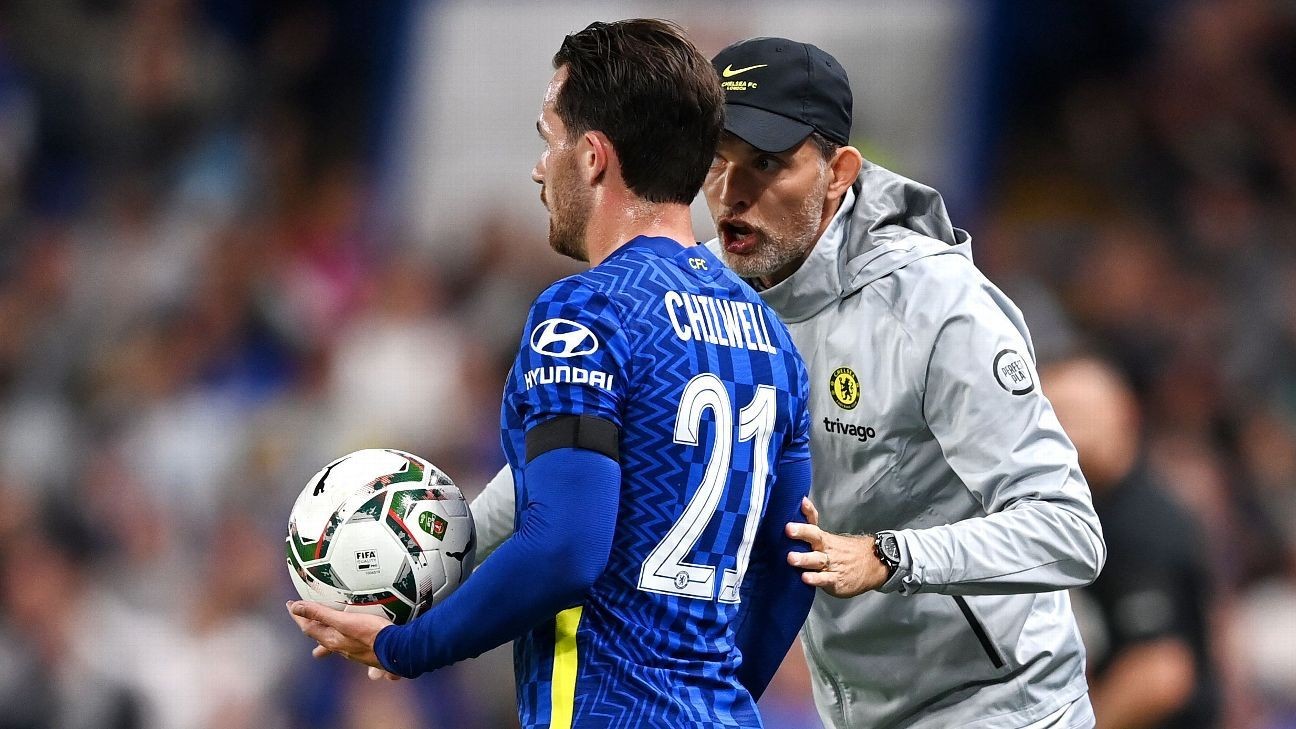 Chelsea head coach Thomas Tuchel said on Friday that Ben Chilwell has suffered an anterior cruciate ligament injury and the next six weeks will determine whether he needs surgery which could rule him out for the majority of the season.

The 24-year-old was forced off midway through the second half of Tuesday's 4-0 Champions League win over Juventus with a knee problem following a challenge by midfielder Adrien Rabiot.

- ESPN's Notebook: The inside stories in football

Reports had suggested Chilwell was set for a lengthy spell on the sidelines but Tuchel was upbeat about the possibility of the England international avoiding an operation.

"Ben has a partial ACL tear and the decision is to treat it conservatively," Tuchel said. "The next six weeks will tell the story if he makes it and will be fully available within this six weeks, or after the six weeks or needs surgery after that.

"Now I only care about the six weeks. The first reaction of his body is very positive so hopefully it stays like this.

"This is the decision after all the examinations and it is a very responsible decision, there is no rush in it and no pressure. This is the reasonable way to do it so all the focus is on the next six weeks.

Chilwell was in a rich vein of form having forced his way into the first team, scoring three goals in four matches during October and Tuchel added: "There is never a good moment for big injuries and for injuries in general but this for him personally is a very bad moment because he was so involved, so good and so full of confidence.

"He was a huge part in our performances and victories in the last weeks. We are very sad but he is actually at the moment very positive. I just spoke to him some minutes ago. He is very positive because his body reacts very positive to the first treatment and the injury. After a while, you have to refocus on the positive things which is now the next weeks."

N'Golo Kante is also set to miss Sunday's visit of Manchester United after suffering a twisted knee against Juventus. Tuchel said it would be "almost a miracle" if he makes the game and instead the midfielder is likely to be sidelined for a few days.

United will be managed be caretaker boss Michael Carrick after the club sacked Ole Gunnar Solskjaer on Sunday and although they arrive 12 points behind leaders Chelsea, Tuchel said they could still be considered contenders.

"I was [expecting them to challenge for the title] and maybe I still am," said Tuchel. "I will never write anybody off, not in this league and not in this game because it is a big club, first of all, but a very experienced and individually a top level group of players.

"This is still the case. Part of the performance from us is to not let them perform because once we let them perform you can see within seconds and minutes in every game the full potential and talent of these players."

Tuchel also hailed the tactical influence of Ralf Rangnick, who is set to become United's interim boss but not in time for Sunday's game.

Rangnick gave Tuchel his first coaching opportunity with Ulm Under 15s when he was forced into early retirement as a player aged 24 due to a knee injury and the Blues boss offered a curious endorsement of Rangnick's methods.

"He helped me a lot," Tuchel said. "He was my coach and then one of the main figures to convince me to try coaching.

"He had a huge influence on all of us at this time because he showed us that it is not necessary to follow people to the toilet in football games.

"That was the belief in those days, that the defenders follow their strikers wherever they go. He showed us that it is possible to defend everybody in a zone."