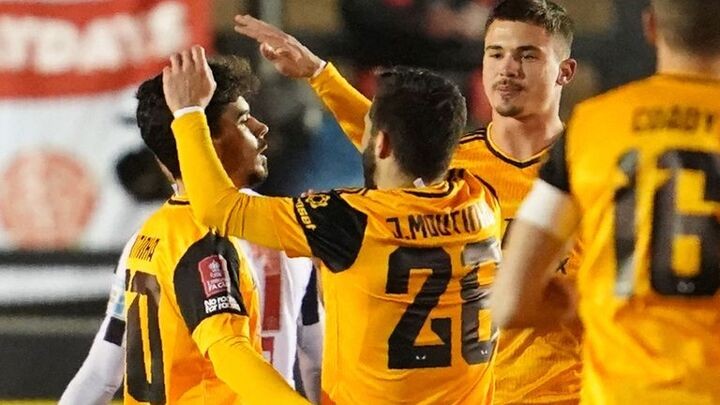 A stunning strike from Vitinha proved the difference as Wolves edged out non-League Chorley 1-0 to reach the FA Cup fifth round.

The Portuguese youngster scored with a powerful, swerving long-range effort after just 12 minutes of a hard-fought tie at Victory Park.

But the Premier League side failed to convert their obvious superiority into further goals as the National League North part-timers made life uncomfortable.

Defender Andy Halls went close to claiming an equaliser with a header that was tipped over the bar by John Ruddy.

The Magpies pushed until the end but Wolves held out without major alarm to book a date with Southampton or Arsenal.

Chorley fielded the same team that beat Derby in the third round, but the challenge facing them this time was completely different from a fortnight ago. Whereas the Championship side were forced to field a youth side after a series of Covid-19 infections, Wolves were laden with Premier League experience.

Manager Nuno Espirito Santo made six changes from the side beaten by West Brom last time out, but the challenge was not taken lightly. Current England international Conor Coady and European Championship winner Joao Moutinho were among their headline starters, as was Fabio Silva.

Chorley had started positively. In 1986, they stunned a then-Fourth Division Wolves in a first-round replay and they may have harboured hopes of an even greater upset as they tried to take the game to the visitors.

Harry Cardwell set off on a charge down the right inside the first minute to tee up Elliot Newby, but Ruddy comfortably dealt with his shot.

Wolves soon settled and, although Chorley were quick and strong into the challenges, looked comfortable on the ball.

Coady created an early opening with a long ball from deep which led to Patrick Cutrone having a shot blocked.

The goal came when Vitinha collected a short pass and took a couple of touches before unleashing a ferocious drive from 35 yards. The ball dripped and swerved in the air, giving Chorley goalkeeper Matt Urwin little chance, although he did well to get a fingertip to it before it flew past him.

Despite that foothold and a consistent dominance of possession, Wolves struggled to create chances to build on their lead as Chorley - a team containing a personal trainer, a lift engineer and a butcher - held their own.

It was not until the final minute of the first half that Wolves went close again as Cutrone sent a dipping long-range drive narrowly over.

Chorley sensed they had nothing to lose and tried to up the tempo after the break. Connor Hall, who had scored in the three previous rounds, glanced a header at Ruddy and then volleyed over.

Halls then brought a fine save out of Ruddy with a powerful header from a corner.

Wolves responded with a triple substitution, sending on Ruben Neves, Adama Traore and Pedro Neto in an attempt to get the job done.

Chorley fought on gamely but, despite applying some pressure in the final third, they were unable to fashion any further chances to force an equaliser and extra time.