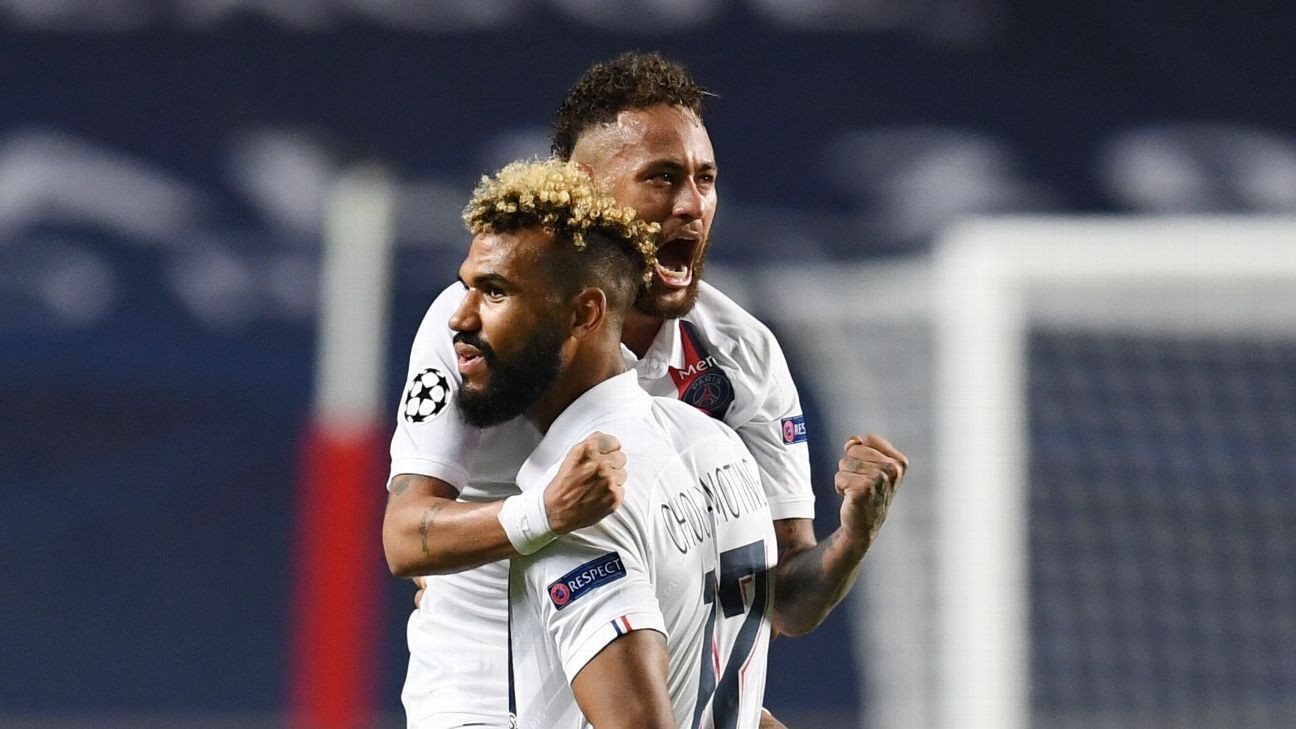 This time, Paris Saint-Germain were Sergi Roberto. They were Marcus Rashford. Twenty-five years of frustration, of remontadas, of disappointments, of sadness all gone in the space of three minutes in added time.

All the heartbreaks the Parisians suffered through the years, especially those nightmare nights against Barcelona in 2017 and Manchester United in 2019 were avenged on Wednesday in an incredible 2-1 win over Atalanta in Lisbon.

- Stream FC Daily on ESPN+
- Champions League quarterfinals: Previews and predictions
- 11 things that you already forgot happened in the UCL this season

No one could have written this script. No one could have predicted in their wildest dreams that Eric Maxim Choupo-Moting would be the hero who would send PSG to the Champions League semifinals for the first time since 1995.

It is further proof that Paris never does anything like anybody else. What a club! Capable of dominating one of the best teams in Europe this season and yet still being so close to another disheartening elimination. Capable of preventing Atalanta and their incredible attack from creating almost anything after Mario Pasalic scored the first goal, and yet staring at another abrupt end to their Champions League dream.

But it was PSG's turn now to be the heartbreaker. The Italians became PSG on Wednesday night -- football is so cruel sometimes. The boys from Bergamo deserved better than to lose in that fashion; they have made their city, their region and their country proud. What's more, they have made football proud. In the end, Atalanta were just lacking a bit of legs and fitness, a bit of experience probably too. Nevertheless, they will remain forever one of the great stories of an exceptional, and extraordinary, 2019-20 season.

But Wednesday night belonged to the Parisians.

The scenes at full time showed all the emotions: PSG boss Thomas Tuchel shouted his joy so hard that they could have probably heard him all the way from Germany. There was so much at stake for the manager. A defeat, even just 1-0, could have got him sacked. He would have been blamed for not starting Kylian Mbappe when he was fit. He would have been criticised for preferring Ander Herrera to Leandro Paredes after the Argentine did more in 20 minutes when he came on than the Spaniard in 70.

Tuchel got his substitutions right though and his game plan as well. He knew and told the players that Atalanta would tire in the second half and that it was then that PSG could put them under a lot of pressure. He knew that whenever his players could beat the press, they would be dangerous. He had not anticipated, however, that Neymar would be so amazing overall but so wasteful in front of goal. Bringing on Mbappe just on the hour changed the game, but it was the Choupo-Moting for Mauro Icardi switch that put PSG through.

There will never be a more unlikely saviour at this stage of the Champions League ever again. Choupo-Moting injured Marco Verratti at training 10 days ago. He only owes his place in the squad because Edinson Cavani refused to extend his contract in Paris to play in this quarterfinal. And he only came on because Icardi was the shadow of usual self.

But the Cameroon international seized this chance, gave it his best and was decisive on both goals. As a tribute and a grand gesture, Neymar, who was named man of the match, decided to give his teammate the trophy. For the rest of the PSG squad and fans alike, all is forgotten for Choupo-Moting: All the chances missed, all the average performances put on in the last two years, all the clumsy times like when he stopped Christopher Nkunku's shot on the goal-line against Strasbourg last season. All is forgiven. Forever, his name will be synonymous with one of the club's greatest ever moments.

And what about Neymar precisely? He wanted Wednesday to be his night. He wanted to be the star, the Lionel Messi of his team. He wanted, more than ever, to own a game of this magnitude and to offer it to PSG. He was unstoppable but not decisive for 90 minutes. He was everywhere, nutmegging opponents, creating chances, making differences, being kicked all around the pitch. He completed 16 dribbles, the best tally for a player in a single Champions League game since Messi with Barcelona against Manchester United in April 2008 -- the Atalanta defenders didn't know how to stop him. He should have scored one, two maybe even three goals.

PSG put to rest 25 years of frustration on Wednesday night, and had the most unlikeliest of heroes in Eric Maxim Choupo-Moting to thank for it. David Ramos/Getty Images

But in the 89th minute, PSG were 1-0 down and Neymar was about to be, very much like Tuchel, the scapegoat for the defeat because of all those chances missed. He persevered, though, and never gave up. He was eventually involved in Paris' two goals. His little ball through for Mbappe for the match-winner was an absolute jewel.

When Neymar arrived at the Estadio da Luz 90 minutes before kick off, he was relaxed. He had a new mohawk haircut done on the day. He was carrying the team's speaker, sunglasses on his head. Maybe, he knew this would be his night? He will share it with Mbappe. The French prodigy's incredible quick recovery from an ankle injury meant he could come on in this game and help his Brazilian friend to push Paris through to the semifinals. Like in 2017 with Monaco, Mbappe will have another go at reaching the Champions League final. After the game on Wednesday, he tweeted: WE ARE PARIS SAINT-GERMAIN. This is his club, his city and he has never been prouder of it.

Like Neymar and Mbappe, the whole PSG squad, even the injured Verratti or the suspended Angel Di Maria in the stands, believed until the end. The unity and the team spirit has been fantastic this season. They all believed that their luck would finally turn and that karma was on their side this time. The rest is history.

On the day of the club's 50th anniversary, it was written that this Wednesday night would be different. Not many PSG players or fans will sleep much now -- just like in 2017 and 2019, but not for the same reasons.