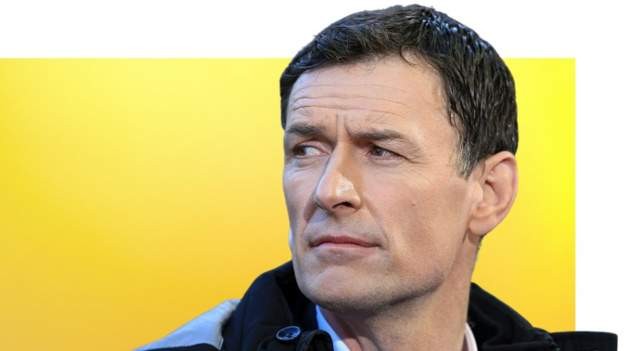 BBC Sport football expert Chris Sutton is picking scores for every top-flight game this season against a variety of guests.

For this weekend's fixtures, he is up against Editors bassist Russell Leetch.

Editors' new album, EBM, is out next week. They start a UK tour in January.

Leetch is a lifelong Aston Villa fan because of his godmother, and went to his first game more than 30 years ago.

"My parents weren't into football," he told BBC Sport. "So she was the one who was like 'you've got to support Villa'.

"Every present I got from her for Christmas or birthdays was something to do with Villa - it worked too, because I became obsessed with them despite all my mates being Manchester United fans, rather than supporting their local team.

"That is how it started, really. My first game was in 1991, and it has been a real journey with Villa since then - from being title contenders to relegation and then getting back into the Premier League.

"I was there at Wembley for the Championship play-off final when we got promoted in 2019, which was such a highlight.

"I actually loved being in the Championship - I went to a lot of games when we were down there, and it was nice to see us win a lot of them for a change because we'd had a few years of being pretty bad and just hovering above the Premier League relegation zone.

"It's great to be back in the Premier League of course, but there are still so many ups and downs. We had the bounce under Steven Gerrard when he took charge last season and then suddenly everyone started talking about us challenging for the top six, but it doesn't work like that - unfortunately!

"This season has not been easy. It feels like we have bought a lot of players who might not be exactly what we need on the pitch, and things like the Tyrone Mings saga - when Gerrard took the captaincy off him - have not helped the mood either.

"It is going to be very interesting to see what happens over the next few weeks. It feels like the fans have turned a little bit on Gerrard so he needs some more results and performances like the one we saw against Manchester City last time out."

A correct result (picking a win, draw or defeat) is worth 10 points. The exact score earns 40 points.

Games kick off at 15:00 BST unless otherwise stated

This is a really big game for Aston Villa as we head into the international break with Gerrard coming under a bit of pressure.

Southampton have made a better start to the season than Villa have, but the home fans will expect to win this one.

It's going to be close, but I think Villa will edge it.

Russell's prediction: I went to this game when we played Saints at the start of March. It was my 40th birthday and we won 4-0, which was a very nice touch - what a birthday present! Since then, though, we have only won four more games [out of 18] so it is a testing time for Gerrard and he really needs a win here, because there will be more murmurs about his future if we don't. I'm going to this one too - it will be my first game of the season - and I think it will be a tight game but hopefully we will edge it. 2-1

This is a massive game for Nottingham Forest too, after they lost 3-2 to Bournemouth last time out at the City Ground, after leading 2-0.

I thought the manner of that defeat could be damaging for Forest and their fans, and we might find out how resilient they are here because Fulham will have a real go at them.

Aleksandar Mitrovic scored twice when Fulham won this fixture 4-0 in the Championship last season. Forest fans won't thank me for saying this, but I don't think they will keep Mitrovic quiet this time either, even though they have a completely different team.

Russell's prediction: Like us, Forest need a home win but I actually think this will end up a draw. Fulham look pretty solid and they haven't changed too much, while there is a lot of bedding-in to be done at Forest. 1-1

I was at this game at the end of last season, when Manchester City won 5-1 and Kevin de Bruyne was absolutely brilliant.

Wolves now have to worry about stopping Erling Haaland too, and Borussia Dortmund were the latest team to find out how difficult that is, even after defending well for most of their game at Etihad Stadium on Wednesday.

I actually fancy Wolves to grab a goal, but I really don't see them keeping City out. Pep Guardiola's side won't run away with it this time, but they will leave with the points again.

Russell's prediction: City look very strong already and it is almost a case of saying you can give them the title now. 0-3

Russell on Jack Grealish: I watched Jack develop as a player at Villa during our time in the Championship - he was so small when he played for us as a teenager in the FA Cup final in 2015, but look at him now and he is a different beast. He didn't have a great first season at City but we know how good he is and, when he is fully fit again, I hope he shows everyone what he can do.

Newcastle boss Eddie Howe will be desperate to beat his former club and there are several reasons why the Magpies should do so, convincingly.

Howe now has a few options up front and you know his side will play on the front foot and create lots of chances at St James' Park. They should get a few goals too.

Bournemouth will be trying to build on their comeback win at Forest last time out, but I can't see them getting anything from this one. They have proved me wrong before, though.

Russell's prediction: The Eddie Howe derby! He is doing a brilliant job at Newcastle and they are going to be far too strong for Bournemouth. 3-0

Tottenham only suffered their first defeat of the season against Sporting Lisbon on Tuesday but I have to say that I don't think their performances have always been as good as their results in the past few weeks.

Spurs haven't always clicked, which is something for their manager Antonio Conte to think about, but they should still make short work of Leicester even if they don't play well this time too.

The Foxes have got plenty of firepower themselves but their problem is clearly defensively - they always look like they are going to concede goals.

I've kept Spurs striker Son Heung-min in my fantasy team because this looks like a good game for him to get off the mark this season - so it will be my fault if that doesn't happen.

Russell's prediction: I can only see another defeat for Leicester. Spurs have always been good going forward but Conte has made them solid at the back too. Who makes the top four is going to be interesting this season, but I think they will be in it. 2-0

Brentford got off to a great start last season by beating Arsenal at home in their first game after being promoted, and there will be a cracking atmosphere there this time too.

The Gunners have improved a lot from 12 months ago, but the Bees have shown recently against Manchester United and Leeds that they carry a real threat.

So, this will be a tough test for Arsenal - and I just have a sneaky feeling that Brentford will get something out of the game.

Russell's prediction: This will be a goal fest! I've been impressed by Arsenal so far, but I just feel like this is going to be one of those crazy games. 2-3

This game has got draw written all over it - which is why I am going for a different outcome altogether!

You could argue both teams have been a bit unlucky not to have more points on the board so far - West Ham in particular were on the wrong end of a terrible VAR decision in their defeat by Chelsea last time out.

Everton are still looking for their first league win of the season, although there was not much wrong with their performance against Liverpool in their last game, and they are becoming a difficult team to beat.

A win would kickstart the season for both sides, and I think it is the Hammers who will get it. They beat Everton home and away last season, and I'm going for a repeat result - just about.

Russell's prediction: A David Moyes derby! I thought Everton manager Frank Lampard might be one of those to be under pressure early on but it looks like he is building a decent team. They played well in the Merseyside derby and will be after three points here, but I think Moyes will make sure West Ham do not get beaten. 0-0

How did Sutton do last week?

No Premier League games took place last weekend after football paused as a mark of respect following the death of Queen Elizabeth II.

*Win, draw, loss prediction based on highest % of vote for each match.